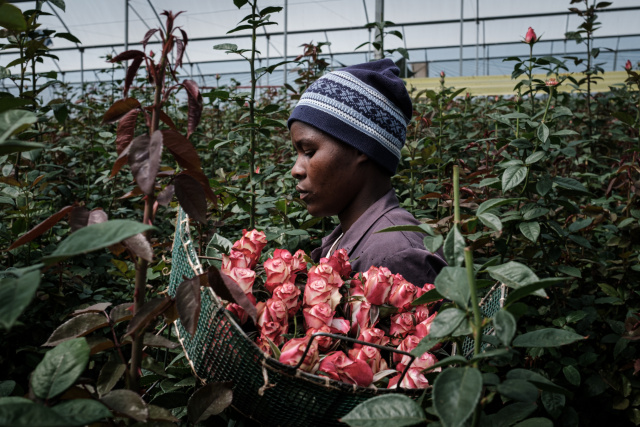 A worker of a flower farm collects roses everyday even after completely shutting down all their exports to Europe, Australia, Russia, China and Japan at the Bliss Flora in Nakuru, Kenya, on March 23, 2020. Flower exports are one of the major export products of Kenya. / AFP / Yasuyoshi CHIBA

(AFP) - From Covid-19 to the war in Ukraine, external crises have put pressure on African economies, but many on the continent see opportunities to undertake radical reforms.

Africa already showed some resilience during the pandemic as its economic contraction was less severe than in the rest of the world, shrinking by two percent compared to 3.3 percent globally in 2020.

While Russia's invasion of Ukraine is weighing on the world economy, Africa faces a better outlook again in 2022.

"Africa is headed towards growth of around 3.7 percent, while in North America and Europe there is a real risk of recession", said economist Lionel Zinsou, formerly prime minister of Benin.

The conflict in Europe has fuelled a surge in global inflation, but Zinsou said growing prices for raw materials will compensate for the higher costs of imports in Africa.

Another positive signal is that investor confidence in Africa is up to a higher level than that before the pandemic.

Of 190 business owners in Africa who were questioned, 78 percent voiced confidence about their development prospects -- compared to 61 percent before the Covid crisis, according to a report by the Deloitte accountancy firm.

The fallout from the war in Ukraine, however, remains a threat as it has driven up prices for wheat and other key agricultural products, sparking fears of famine in some countries.

"We are concerned about the slowdown in global growth and the availability for Africa of certain products such as wheat or fertilisers", Ivory Coast President Alassane Ouattara said during the Africa CEO Forum in Abidjan this month.

Makhtar Diop, general director of the International Finance Corporation (IFC), a branch of the World Bank, said African economies "have taken a hit and haven't regained their pre-2019 growth rates".

"The situation remains particularly difficult with inflation which disproportionally affects the poorest populations," he added.

But some see the situation as a chance for African countries to map out new strategies.

"We lose a good part of our crops each year due to lack of electricity and cold chain," said Zinsou, referring to the transport of goods that need to be kept cool across the supply chain.

These losses could be reduced through infrastructure investment, he added.

For Diop, "every crisis is an opportunity to transform the situation structurally. There is potential for the economic transformation of African countries by increasing the added value created on the continent."

Some countries have stepped up the pace in recent years. Ivory Coast has built new cashew processing plants, while Nigeria is building a major oil refinery in Lagos.

In Guinea, foreign companies have recently been tasked with building bauxite processing plants.

"One of the consequences of the pandemic is that many groups wanted to depend less on foreign imports," said Emmanuel Gadret, head of Deloitte in francophone Africa.

Georges Wega, deputy director of international banking networks for the Africa region at France's Societe Generale financial group, believes that Africa has "a lot of potential" to finance its essential projects.

"This is the time for Africa to gain its independence in many aspects. We need to rely more on funds raised on the continent versus external debt," he said.

The African Continental Free Trade Area (AfCFTA), which aims to harmonise customs tariffs across the continent, which is gradually happening, holds out hopes of boosting intra-African trade.

"Africa has been extraordinarily responsive (to the pandemic), financially and technically, and it will be again," said Zinsou.