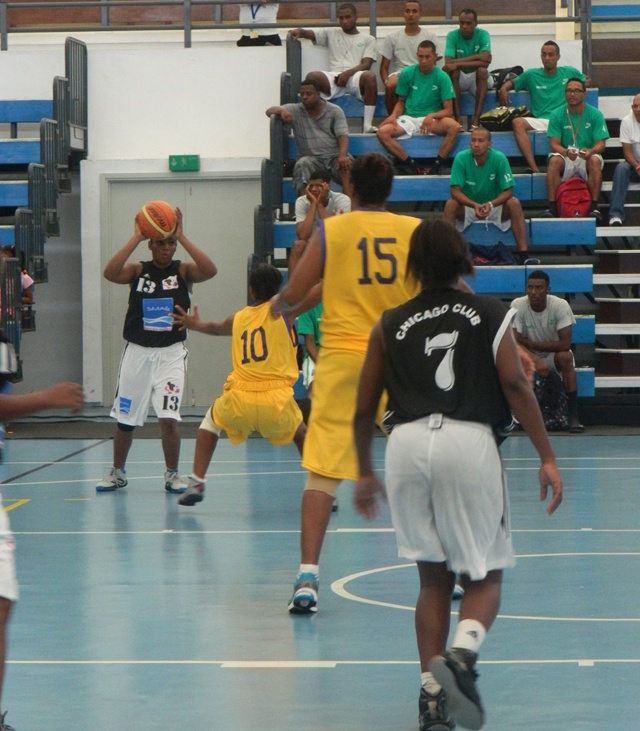 Stars went into the match with an advantage as they had defeated the same Chicago in the group phase of the competition, when the two teams met in opening match at the Seychelles basketball arena at the Roche Caiman Sports Complex not far from the archipelago’s capital of Victoria.

Star’s 32 points lead at the end of their first encounter suggested the play-off for third place would be a mere formality for the Seychellois players who eventually won yesterday’s encounter on the score of 71-49.

But the victory was not as easy as the score suggests, as Chicago looked like they might have enough juice to spring a surprise after the first 20 minutes of the second brush-off between the two rivals.

Stars had their work cut out for them in the second half but the players coached by Clifford Joubert responded well to lead the game by 20 points after the third segment of play.

They did so thanks to the impressive Sheriffa Agathine, loaned from HotShots (Seychelles women’s basketball team), who ran riot in Chicago’s defence which had no response to her surging runs that really made a difference for Stars.

She was assisted by the agile Betina Desir and Lucia Souffe who put to use their vast experience to impose their team’s play on their opponent.

Stars also made better use of their advantage in size in the second half to force the thin looking Chicago into submission, especially their star player C. Mohamed who was exerting a lot of pressure on Star’s Tina Agathine In defence.

The local side’s strategy to minimise the threat she posed, was to double team the skilful player from Mayotte each time she had possession of the ball.

Mohamed was taken off periodically by Chicago’s entourage to avoid more damages to a knee injury she had.

It was during the time she spent off the court in the final two quarters that Stars’ pounced to take full advantage of the match.

Souffe and company added 36 points to their tally in the final 20 minutes, while Chicago managed only 14 points.

Mohamed was sent back onto the court towards the end of the fourth quarter and her presence evened things out a bit in the final minutes, but it was too little too late as Stars triumphed with the score reading 71-49.

Chicago’s power forward Mohamed was the Mayotte team’s only player to score double digits emerging as the top scorer of the match with 25 points, 10 points more than Souffe and Aghatine (Tina) who both contributed 15 points for Stars.

Chicago’s coach Fidelice Eugene admitted afterwards that his team was “a tad off the level displayed by the other three teams contesting the women’s tournament.”

He however relished the opportunity to have played against such opponents, noting that it had been “a fruitful outing for women basketball as a whole for Mayotte.”

In two other matches on the men’s side played on Saturday, Seychelles’ Beau Vallon Heat were 56-89 losers against BCM of Mayotte, while Reunion’s St Pierre brushed aside Real of Mauritius 82 -47.

Beau Vallon Heat ends the tournament without a win, while Real has had one victory over the team from the northern part of the Seychelles main island of Mahé.

The men’s event is running towards a complicated end, with three teams – St Pierre, BCM and the Seychelles PLS Hawks – all still holding on to the possibility of win the championship title.

Hawks will play a final game against the undefeated BCM from Mayotte this afternoon while on the women’s side, Seychelles Mont Fleuri team will be up against Mauritius' L'Union Sportive Beau Bassin Rose-Hill in the final match later today.