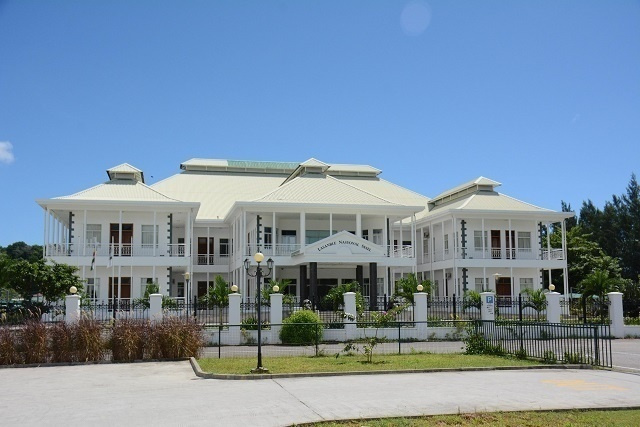 Minister Fonseka made the statement when answering a private notice question in the National Assembly. (Seychelles News Agency)

Two foreign nationals who were arrested in Seychelles last month in connection with robberies that took place at two foreign currency exchange bureaus have been deported, a top government official said on Tuesday.

The Minister for Internal Affairs, Errol Fonseka, made the statement when answering a private notice question from the Leader of the Opposition in the National Assembly from the United Seychelles (US) party, Sebastien Pillay.

Fonseka said that the two persons, a 36-year-old woman from Jordan and a 29-year-old man from Egypt, were deported from Seychelles, an archipelago in the western Indian Ocean, on Wednesday, June 15, on an Emirates Airline flight.

The second incident, where 1,200 euros were stolen from an exchange bureau belonging to the same company at around 5 pm, took place the same day and was reported to the Anse Royale Police Station.

Both suspects were arrested the same day at 10.48 pm at an apartment in the district of English River.

Fonseka said that the decision to deport the two suspects was taken by the Office of the Attorney General and the Commissioner of Police and all the money that was stolen was returned to the victim.

"I want to inform the Assembly that the decision taken by the AG's Office in its role as the public prosecutor, and the police is one that the government does not and will not interfere with and this is according to article 76.4 of our Constitution," he explained.

Gervais Henrie, the Deputy Speaker, and elected Member of the National Assembly for the central district of Mont Buxton from the Linyon Demokratik Seselwa (LDS) ruling party asked about the conditions made for the deportation and on what grounds was the decision taken.

"The two foreign nationals will not be allowed in our country again and furthermore we have alerted other international authorities so that there is a track on them. This is a high deterrent that we have made so that these kinds of incidents do not happen again. The other points that might have been considered were on what charges will the two be prosecuted, the cost of imprisonment and when the victim would get the money returned," said Fonseka.

He added that the operation was done very fast and did not allow the suspects any time to react.

"This was done to send a message that when foreigners come to Seychelles if they do any such acts, while we welcome them as visitors and they cross the line, we will deal with them very quickly," added the minister.

Johan Loze, a proportional member from the US party asked if an effort was made to exchange the Egyptian for the Seychellois men serving life imprisonment sentences in Egypt.

"The two cases are separate and the gravity is different and is not in my domain to comment on it," said Fonseka.

The three Seychellois -- Ronny Norman Jean, Yvon John Vinda and Dean Dominic Loze -- were sentenced to death by execution on April 7, 2013 after being found guilty of drug trafficking. In 2015, their sentences were commuted to life imprisonment.