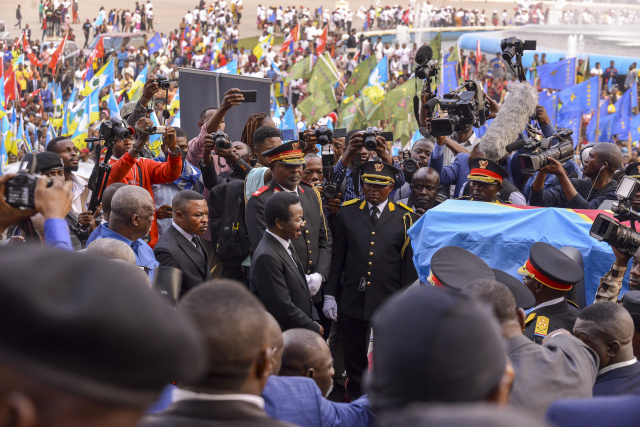 President of the Democratic Republic of Congo's national assembly Nkodia Mbosso (C) pays respects to slain Congolese independence hero Patrice Lumumba's only surviving remains at Palais du Peuple in Kinshasa on June 27, 2022. Slain Congolese independence hero Patrice Lumumba's only surviving remains, a single tooth, arrived in Kinshasa on June 27, 2022 where it is due to be laid to rest later this week.
The nationalist politician became an anti-colonial icon when he delivered a fiery speech against racism on June 30, 1960, when his native central African country proclaimed independence from Belgium.
But Lumumba, the country's first post-independence prime minister, was overthrown that September.
Separatists from the southern region of Katanga and Belgian mercenaries then executed him and two close supporters in January 1961.
His body was dissolved in acid after he was killed, but a Belgian police officer kept the tooth as a trophy. Belgian authorities in 2016 seized the relic from his daughter.
On June 20, Belgium finally returned the tooth to Lumumba's family members during a ceremony in Brussels. (Photo by Arsene Mpiana / AFP)

(AFP) - The scant remains of DR Congo's fiery independence hero Patrice Lumumba were to be interred on Thursday after a pilgrimage that revived traumatic memories but also stirred national unity.

A single tooth is all that remains of the young nationalist who was murdered in January 1961 at the age of 35, just months after becoming Congo's first post-colonial prime minister.

A coffin containing the remains was to be enshrined in a mausoleum in Kinshasa, in a ceremony hosted by President Felix Tshisekedi coinciding with the country's 62nd anniversary.

Topped by a large statue of Lumumba, the mausoleum is located on a main avenue of the capital which also bears his name.

Lumumba was among the vanguard of pan-African leaders who led the charge to end colonialism in the late 1950s.

He rose to prominence in 1958 when he launched a political party, the Congolese National Movement (MNC), which called for independence and a secular Congolese state.

His party won national elections in May 1960, a month before independence from Belgium, leading him to be named first prime minister of the country when it became independent.

He stunned Belgium with a speech on independence day -- attended by King Baudouin -- that accused the exiting colonial masters of racism and "humiliating slavery" of the Congolese people.

Within three months, Lumumba was forced out by a coup fomented with the help of Belgium and the CIA, which also opposed the support he had requested from the Soviet Union.

In January 1961, Lumumba was handed over to the authorities in mineral-rich southeast Katanga province, which had seceded from the fledgling nation months earlier with Belgium's support.

He was shot dead and his body was dissolved in acid, but a Belgian police officer involved in the killing kept one of his teeth as a trophy.

After years of campaigning by his family, Belgium returned the tooth on June 20, a move that followed a visit of reconciliation by Baudouin's nephew and successor, King Philippe.

The remains were taken to Lumumba's home area of Sankuru in the centre of the country, to his political stronghold of Kisangani in the northeast and finally to the place where he was murdered before being flown to Kinshasa.

"The figure of Patrice Lumumba is a prime symbol of national unity, transcending political differences," said Evariste Mabi, a premier in the 1980s under Lumumba's nemesis, dictator Mobutu Sese Seko.

"(He) embodies the people's successful struggle for freedom."