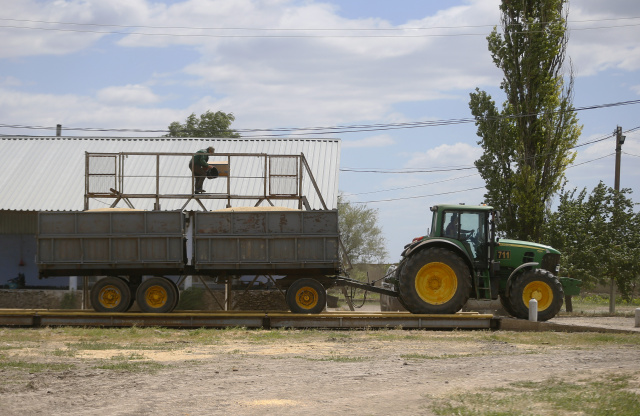 Kyiv has for weeks accused Russia and its allies of stealing its grain from southern Ukraine, contributing to a global food shortage caused by grain exports blocked in Ukrainian ports.

Until now shipments have been transported by land, Kyiv says.

Thursday's grain shipment from the port of Berdyansk marks the opening of a sea route to export wheat from Ukraine to third countries.

"After numerous months of delay, the first merchant ship has left the Berdyansk commercial port, 7,000 tonnes of grain are heading toward friendly countries," Evgeny Balitsky, the head of the pro-Russia administration, said on Telegram.

Russia's Black Sea ships "are ensuring the security" of the journey, he said, adding that the Ukrainian port had been demined.

Balitsky did not specify the final destination of the cargo.

Berdyansk is a port city on the northern coast of the Sea of Azov, in the region of Zaporizhzhia in southeastern Ukraine.

The southern Ukrainian regions of Kherson and Zaporizhzhia have been largely under Russia's control since the first weeks of Moscow's military intervention, and are now being forcefully integrated into Russia's economy.

The pro-Moscow officials in the two Ukrainian regions claim that they have "nationalised" state infrastructure and property there and buy their crops from local farmers.

A representative of the pro-Moscow authorities, Vladimir Rogov, told state news agency RIA Novosti that 1.5 million tonnes of grain can be exported via Berdyansk.

Moscow's military intervention in Ukraine, a country known as Europe's breadbasket, has pushed up food prices and led to shortages, as Russia's blockade of Black Sea ports prevents millions of tonnes of grain from being shipped out.

The crisis has sparked fears of famine in vulnerable countries highly reliant on Ukrainian exports, particularly in Africa.

Russia insists that it will let Ukraine ship its grain if Kyiv forces demine sea lanes.

Talks involving Turkey and the UN have brought no results so far.

On Thursday, Russia said it had pulled its forces from Ukraine's Snake Island, calling it a "goodwill gesture" to allow Kyiv to export agricultural products.

Russia, the largest wheat exporter in the world, has said it is facing difficulties in exporting its own grain due to unprecedented Western sanctions over its intervention in Ukraine.

Pro-Moscow officials in the regions of Kherson and Zaporizhzhia are hoping that the occupied territories could stage a referendum and join Russia in the near future.

On Wednesday, pro-Russian authorities said they were launching bus and train services between Moscow-annexed Crimea and the regions of Kherson and Zaporizhzhia.

The pro-Moscow administration of the Kherson region also announced the opening of a branch of Russian Pension Fund responsible for paying state pensions.

Putin has said Russian forces will not occupy Ukraine.

The Kremlin claims local residents will choose their own future, suggesting they are in favour of a referendum on the status of Ukraine's occupied territory.