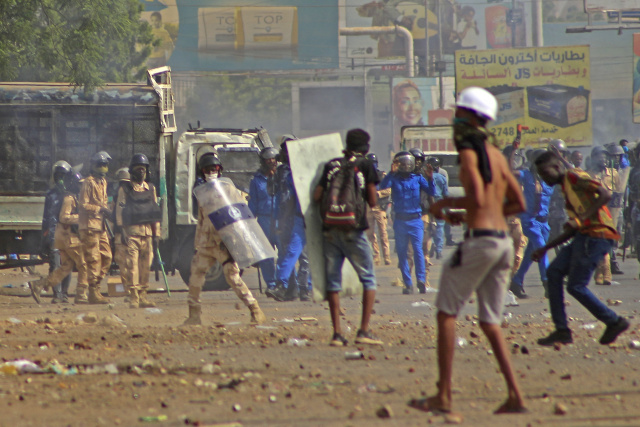 Sudanese anti-coup protesters clash with security forces in the Khartoum Bahri (North) twin city of the Sudanese capital on June 30, 2022. At least seven Sudanese demonstrators were killed as security forces sought to quash mass rallies of protesters demanding an end to military rule, pro-democracy medics said. In one of the most violent days this year in an ongoing crackdown on the anti-coup movement, AFP correspondents reported security forces firing tear gas and stun grenades to disperse tens of thousands of protesters. (Photo by AFP)

(AFP) - Activists in Sudan have called for mass rallies Thursday to demand the reversal of an October military coup that prompted foreign governments to slash aid, deepening a chronic economic crisis.

The protests come on the anniversary of a previous coup in 1989, which toppled the country's last elected civilian government and ushered in three decades of iron-fisted rule by Islamist-backed general Omar al-Bashir.

They also come on the anniversary of 2019 protests demanding that the generals, who had ousted Bashir in a palace coup earlier that year, cede power to civilians.

Those protests led to the formation of the mixed civilian-military transitional government which was toppled in last year's coup.

Security was tight in the capital Khartoum on Thursday despite the recent lifting of a state of emergency imposed after the coup.

An AFP correspondent said internet and phone lines had been disrupted since the early hours, a measure the Sudanese authorities often impose to prevent mass gatherings.

More than 100 people have been killed in protest-related violence, according to UN figures, as the military ahs cracked down on the anti-coup movement.

"June 30 is our way to bring down the coup and block the path of any fake alternatives," said the Forces for Freedom and Change, an alliance of civilian groups whose leaders were ousted in the coup.

Activists have called for "million-strong" rallies to mark the "earthquake of June 30".

Small-scale demonstrations took place in the run-up to call for a huge turnout on Thursday.

"Violence against protesters will not tolerated," he said in a statement, adding that nobody should "give any opportunity to spoilers who want to escalate tensions in Sudan".

The foreign ministry criticised the UN envoy's comments, saying they were built on "assumptions" and "contradict his role as facilitator" in troubled talks on ending the political crisis.

Alongside the African Union and east African bloc IGAD, the United Nations has been attempting to broker talks between the generals and civilians, but they have been boycotted by all the main civilian factions.

The UN has warned that the deepening economic and political crisis threatens to push one third of the country's population of more than 40 million towards life-threatening food shortages.