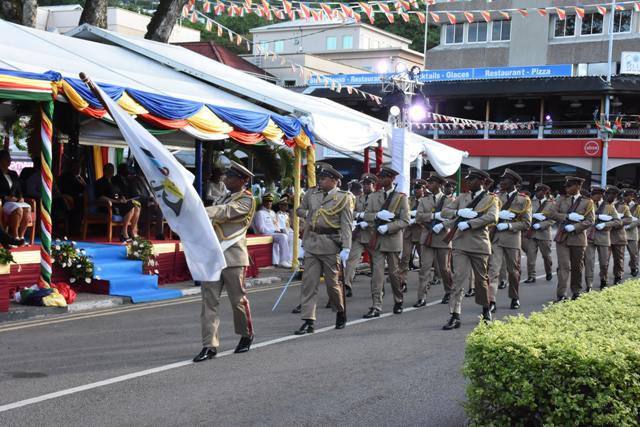 The parade, which for many years marched on the tracks of the stadium 'Stad Linite', has this year made its way to the centre of the Seychelles' capital Victoria.

A military parade which is usually the highlight of the Seychelles National Day celebrated on June 29, the day it got its Independence from Britain, took place on Sunday.

The event was postponed to Sunday, July 3, to unfavourable weather conditions last week.

The parade, which for many years marched on the tracks of the stadium 'Stad Linite', has this year made its way to the centre of the Seychelles' capital Victoria to be greeted by cheering crowds.

This year's special guest was Sheikh Shakhboot Nahyan Al Nahyan, UAE Minister of State in the Ministry of Foreign Affairs and International Cooperation, who represented Sheikh Mohamed Bin Zayed Al Nahyan, the President of the United Arab Emirates and supreme commander of the UAE Armed Forces.

For the first time, the sound of ceremonial cannons gifted by the Indian government, resonated while the Seychelles' National Anthem was being played.

As is the tradition, the parade showcased local and foreign military forces, the Seychelles Police Force, Seychelles Fire and Rescue Services Agency and youth organisations falling under the Seychelles National Youth Council.

Twenty platoons of men and women in uniform, youths and one from the Indian navy marched from the 'Stad Popiler' along 'Rue Pierre de Possession'.  The parade made its way towards the Victoria Clock Tower along Independence Avenue, saluting Seychelles' President Wavel Ramkalawan. It then proceeded along Constitution Avenue and ended at the 'Stad Popiler' stadium.

The parade ended with a performance of a fusion of the national dances by the youths of Seychelles, an archipelago in the western Indian Ocean.

Seychelles to recognise acts of devotion, bravery and generosity with National Order of Merit award