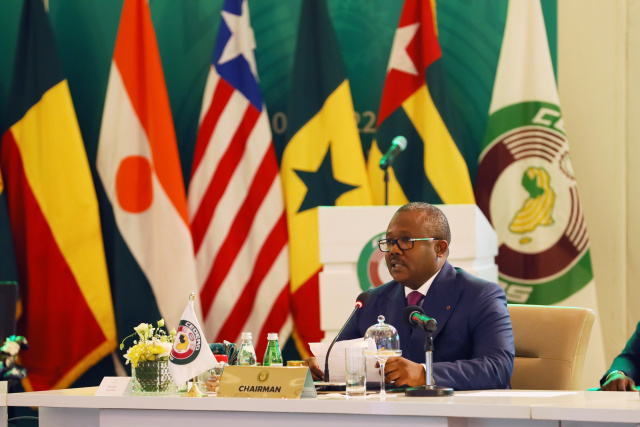 Guinea-Bissau's President Umaro Sissoco Embalo speaks after being elected as ECOWAS Chairperson during the Economic Community of West African States (ECOWAS) 61st Ordinary Session in Accra, Ghana, on July 3, 2022. West African leaders meet on July 3 to review sanctions they have imposed on Mali, Guinea and Burkina Faso, three military-ruled countries in their volatile region, and assess efforts to nail down timetables and other guarantees for restoring civilian rule. (Photo by Nipah Dennis / AFP)

(AFP) - West African leaders on Sunday lifted sanctions on Mali's military regime, accepting a March 2024 return to civilian rule and agreed to allow Burkina Faso two years for its transition back to democracy.

Mali underwent coups in August 2020 and May 2021, followed by Guinea in September 2021 and Burkina Faso this January.

Fearing contagion in a region known for military takeovers, ECOWAS imposed tough trade and economic sanctions against Mali, but lesser punishments against Guinea and Burkina.

"After discussion, the heads of state took a firm first decision to lift the economic and financial sanctions," ECOWAS Commission President Jean-Claude Kassi Brou told reporters about the decision on Mali.

Brou said ECOWAS would continue to monitor the situation and also maintain an ECOWAS suspension of Mali for now.

The decision also demands no military junta member run as a candidate in Mali's future presidential election, according to one ECOWAS delegate.

ECOWAS in January had imposed a trade and financial embargo on Mali after its military government unveiled a scheme to rule for five years.

The sanctions have badly hit the poor, landlocked Sahel state, whose economy is already under severe strain from a decade-long jihadist insurgency.

After months of talks, Malian authorities on Wednesday approved a plan to hold presidential elections in February 2024.

The vote will be preceded by a referendum on a revised constitution in March 2023 and legislative elections in late 2023.

The ECOWAS mediator in Mali, former Nigerian leader Goodluck Jonathan, visited the country last week. A member of his entourage had told AFP Mali had made "enormous progress".

Burkina Faso -- another Sahel country caught up in jihadist turmoil -- and Guinea have so far only been suspended from the bodies of the 15-nation bloc.

Burkina's junta proposed a constitutional referendum in December 2024 and legislative and presidential elections in February 2025.

An ECOWAS delegate said the regional heads of state had agreed to the two-year transition timeline.

The information was confirmed to AFP by an ECOWAS official who also participated in the summit.

Visiting Ouagadougou for the second time in a month on Saturday, ECOWAS mediator Mahamadou Issoufou had praised junta leader Lieutenant Colonel Paul-Henri Sandaogo Damiba and his government for their "openness to dialogue".

The timetable for a return to civilian rule and the situation of deposed leader Roch Marc Christian Kabore were also discussed, said the former president of Niger.

Political parties allied to Kabore denounced the junta's plans on Friday, saying they had not been consulted in advance.

The situation appears more complex in Guinea, whose junta has refused an ECOWAS mediator and announced a 36-month transition -- a period that African Union chairman and Senegalese President Macky Sall has described as "unthinkable".

Guinea this week has led a diplomatic offensive to assuage the concerns of regional leaders.

The government said it wanted to reassure its ECOWAS "brothers" of its commitment to undertaking a peaceful and inclusive democratic transition.

Guinea's military regime met the main political parties on Monday, but they have made their participation in the dialogue conditional on the nomination of an ECOWAS mediator.