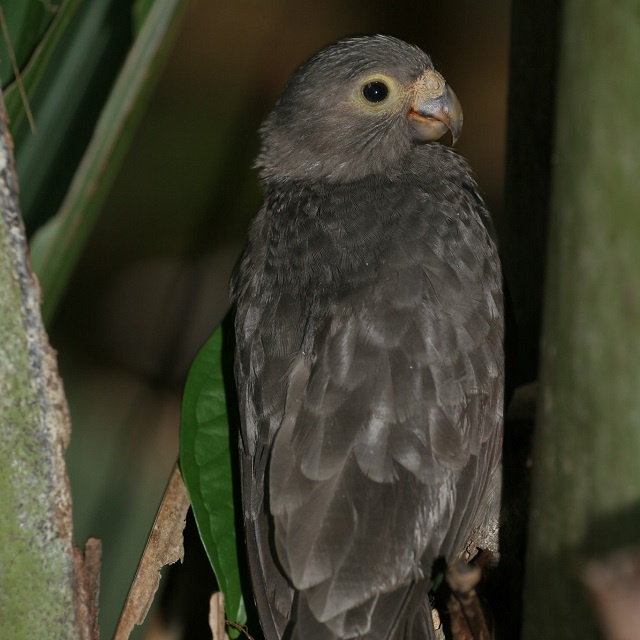 The black parrot project was initiated in 2009 in Seychelles to learn more ab out the endemic bird. (Seychelles Islands Foundation)

(Seychelles News Agency) - Individuals can help the Seychelles Islands Foundation (SIF), an environmental public charitable trust, to collect data and expand their knowledge of the Seychelles black parrot by submitting photos of the endemic bird that wears rings on its legs placed by scientists.

The black parrot, which lives exclusively on Praslin, the second-largest island of Seychelles, is listed as vulnerable on the International Union for the Conservation of Nature's (IUCN) red list due to its small population. According to IUCN, the population of the endemic bird is described as stable with between 730 to 1,170 mature individuals in the wild.

The black parrot, which is actually brownish-gray in colour, mainly breeds in the palm forest of the Vallee de Mai Nature Reserve, a UNESCO World Heritage Site managed by the SIF.

In an interview with SNA, the Vallee de Mai science coordinator, Jessica Constance, said that submissions of photos can be made to blackparrot@sif.sc or to SIF's Facebook page so they can be identified.

Constance said that photos need to "clearly show both legs, so the team can correctly identify the individual parrot" and that the date, time, location, and activity should be included with the photograph submitted, if possible.

Threatened by invasive bird species such as the Indian mynah, black parrot chicks are in constant danger from other aggressive birds, feral cats, rats, invasive ants and even at one point the ring-necked parakeet, which has now been completely eradicated.

Constance said that although the black parrots are found all over Praslin, the majority of the re-sightings are recorded in places where the SIF research team is conducting surveys, predominantly the Vallee de Mai, Fond Peper and Fond Ferdinand.

"This means that parrots that spend more time in other areas of Praslin are less likely to be identified and so less data is collected on these birds," she added.

With the aim of learning as much as possible about these unique birds on Praslin, the black parrot project was initiated in 2009 in Seychelles, an archipelago in the western Indian Ocean. One of the most widely used ways to conduct research on birds is to place identifying rings on the birds' legs and then record when and where the birds are seen in the future.

This allows researchers to find information, such as how far birds travel, what other birds they are frequently seen with, whether the adults remain in the same breeding pairs, how long young birds stay with their parents, and even how long they live.

The method has been used on black parrots since the project began. Every time a parrot is caught, they are fitted with a unique pair of coloured rings.

Following this, the team tries to identify individuals whenever they spot one by recording the colours of the left and right rings. They also record the date, time, location, any other parrots that are nearby, what the birds were doing, and what species of tree they were seen in.