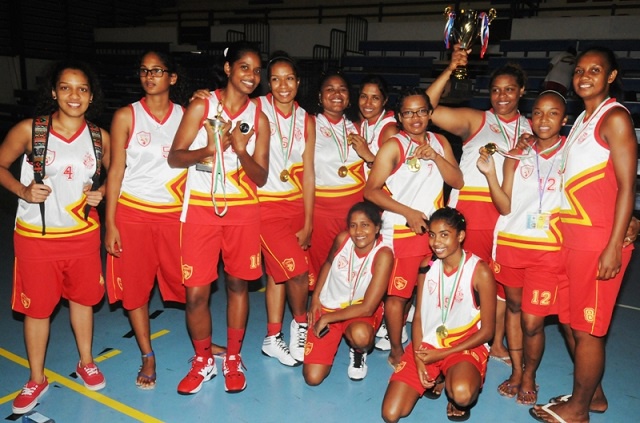 Beau Basin Rose-Hill defeated Seychelles' Mont Fleuri 67-60 in the final match, while BCM outclassed PLS Hawks - also of the Seychelles - 72-59. Both ended the competition winning all of the matches played.

Both Beau Basin Rose-Hill and BCM were undefeated by the time they engaged the final matches, hinting they were clear favourites to walk away 2014 IOCC champions.

But they were both facing teams from the host country in the all-important decisive match, and a great deal of resistance was to be expected as the domestic sides strived to please the local fans.

They would both fail miserably as Beau Basin Rose-Hill outran and out-jumped Mont Fleuri, while BCM handed Hawks a basketball passing lesson by running circles around the Seychelles’ champions.

The Mauritian side already had a win over Mont Fleuri during the league phase of the competition and was therefore beaming with confidence during the final match.

But they faced a highly motivated opponent in the early stages of the game, the score was tied at 20 points after the first quarter and challengingly enough, it read 30-32 in favour of Mont Fleuri by the break.

Beau Bassin Rose-Hill’s Malagasy playmaker M. Ramarojaona took charge of the match from there on and started threading passes to forwards J. Laplanche, C. Adeline and A. Josselin who responded well by putting  them away with ease.

But somehow they were outscored by Mont Fleuri’s Jana Malbrook who wrapped up the game with a game high 23 points.

Malbrook, highly considered the future of women basketball in the Seychelles, had a rather timid time at the competition previously, but came out of her shell for the final.

She was making runs, driving at Beau Basin Rose-Hill’s defence with constant ease and scoring at will for Mont Fleuri.

But her player-of-the-match display was far from enough to prevent as Beau Basin dug deep into its reserves in the final two quarters to break Mont Fleuri’s momentum.

The Mauritian team took a four point lead after the third quarter at 53-49, and went on to extend the lead by 11 points at one time during the fourth quarter, before finally closing the match with a seven point advantage at 67-60.

Speaking after the match Mont Fleuri’s coach Tony Juliette said, “It is always sad to lose a final game but at the same time I have to applaud my players for reaching the final.”

His team’s disappointment was lessened after Simone Malbrook emerged as the tournament’s top scorer to clinch one of two individual prizes won by a Seychellois at the prize giving ceremony.

Malbrook had contributed 14 points in the final match against Beau Basin Rose-Hill, but it was not enough to make her the tournament’s Most Valuable Player (MVP).

That accolade went to Beau Basin Rose-Hill’s Caroline Adeline who was the fourth best scorer at Sunday’s women’s final.

The other Seychellois to take home an individual prize yesterday was in the form of PLS Hawks’ (Seychelles men’s team) Timmy Adam who emerged as the top scorer of the tournament.

This was in spite of his team being on the losing end as Hawks was totally outclassed by Mayotte’s BCM that won the final match 72-49.

Vladimir Buscaglia who scored 15 points in the final game voted the tournament’s MVP as he led BCM’s attacking flair which wowed the crowd gathered at Palais des Sports, the Seychelles basketball arena not far from the capital of Victoria.

He was aided by O. M’Ladrou who grabbed 20 points, A. Chebani 18points and M. Maoulida 11 points.

His best moment was a three pointer in the final quarter of the match which allowed Hawks to narrow the score gap bringing the scores to 57- 65 with only a few minutes remaining before the final whistle.

For a brief moment the crowd had hoped Hawks could overturn the score, but BCM that had all displayed much ease with the ball throughout the game managed to maintain its lead to take home the IOCC title.

St Pierre from Reunion island that was also in the tight race to win the IOCC title took home the silver medal of the competition.

the 2014 Indian Ocean club championship saw the participation of teams from the Seychelles and other Indian Ocean neighbours of Mauritius and the French overseas departments of Mayottes and Reunion.