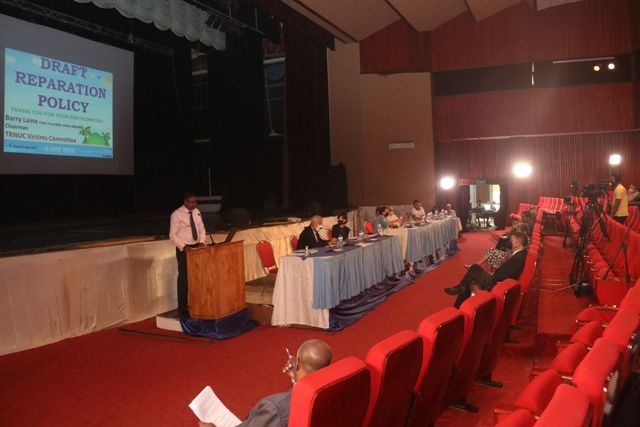 A final meeting with victims and the general public was held on Wednesday. (Seychelles Nation)

Following extensive consultations, the Victims Committee of the Truth, Reconciliation, and National Unity Commission (TRNUC) has agreed that only a fixed sum will be paid to victims of human rights violations, which took place in Seychelles after the 1977 coup d'état until recent history.

In a final meeting with victims and the general public held on Wednesday, the chairperson of the committee, Barry Laine,  outlined that, unlike previous suggestions, allowances that were to be paid in certain cases have now been dropped.

"We should remove the payment of allowances. We now propose one fixed sum and put the coup d'état in our history book, otherwise, there will be people ten years from now arguing about their allowances," said Laine.

He also outlined that instead of having a fixed sum for the different types of crimes committed, the committee is now suggesting a maximum threshold for payment of reparations.

Laine made these statements during his presentation at the fourth and final public meeting on the TRNUC reparation policy draft. The meetings provided the victims and the general public with the opportunity to express their views on the recommendations on what reparations should be given to victims.

The commission has the mission of making recommendations to establish if a violation took place. If yes, the person will receive reparations based on the reparation policy. Another authority will then take up establishing how much a person will get, looking at each case individually. Only then will the country know the total amount due to the victims as reparations.

The chairperson of TRNUC, Gabrielle McIntyre, said that the commission's reparation policy identifies and proposes recommendations for numerous non-monetary forms of reparation, none of which seemed to be disputed.

"The only outstanding aspect which does appear to be a subject of the dispute is the quantum of monetary compensation which should be recommended to victims of various human rights violations found to have been established by the commission," said McIntyre.

As in previous meetings, the subject of who should pay for the reparations was brought up and again it was outlined that it is the government's obligation to do so.

In a video message to the meeting, a United Nations' Special Rapporteur on the Truth, Justice, and Reparation, Fabian Salvioli, shared that the biggest challenge is how the new government will deal with the past.

"The international community suggests in general to establish a transitional justice mechanism, which has five pillars - truth, justice, reparations, guarantees of non-recurrence, and memorialisation. The state must comply with all these five pillars. It is a duty under national and international law, in particular, the International Covenant on Civil and Political Rights," said Salvioli.

Following the meeting, the reparation policy will be finalised. The final TRNUC report will also be concluded and on August 9, it will be presented to Seychelles' President Wavel Ramkalwan. He will have a month to place this report before the Seychelles National Assembly, which in turn will make the document public.

McIntyre said that at the moment the commission has 373 determinations that have been made, out of which 163 have been completed, 99 are in the drafting stage and 111 are left to be started.

"We have already advised the president that volume three of the final report, which will contain all these determinations, might have some pages missing but we hope that they will all be finished no later than the end of September. We are all doing our best to get them done," she said.

General » Be a reporter: Write and send your article » Subscribe for news alert
Tags: International Covenant on Civil and Political Rights, Victims Committee