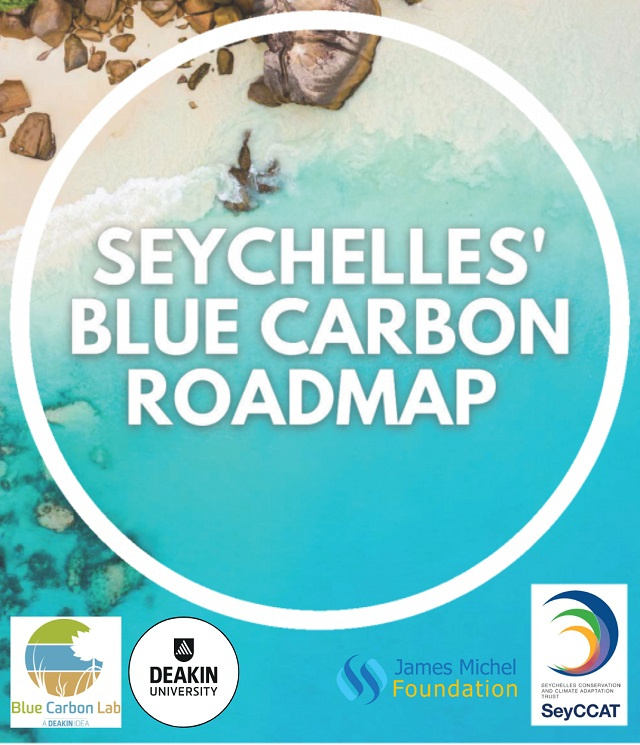 The roadmap proposes a series of social, scientific, governance and financial actions that should be implemented over the next years. (James Michel Foundation)

A roadmap to blue carbon opportunities in Seychelles undertaken by the James Michel Foundation - created by the former president of the country - in collaboration with Australia's Deakin University has been completed, setting the way forward for the protection and restoration of sea-based ecosystems.

Financed by the Blue Grants Fund from the Seychelles Conservation & Climate Adaptation Trust (SeyCCAT), the roadmap proposes a series of social, scientific, governance and financial actions that should be implemented over the next years to increase actions aimed at protecting blue carbon ecosystems.

Blue carbon refers to the carbon that is captured and stored by marine and coastal ecosystems and it is important because it can capture carbon up to four times faster than terrestrial forests.

The chief scientific advisor to the James Michel Foundation, Dr Ameer Ebrahim, told SNA that "globally, up to one billion tonnes of carbon dioxide are being released annually from degraded blue carbon ecosystems, equivalent to 19 percent of emissions from tropical deforestation. With one-third of all blue carbon ecosystems already lost, halting, and reversing their degradation is indispensable to climate change mitigation."

He added that "unfortunately when blue carbon ecosystems degrade, they become sources of greenhouse gases (GHG) releasing ancient carbon back into the system."

The Seychelles archipelago in the western Indian ocean contains one of the most biologically diverse marine ecosystems on the planet while the carbon ecosystems cover over two million hectares, with seagrass beds accounting for 99 percent of the blue carbon extent. The other carbon ecosystem in the island nation is mangrove forests with more than 80 percent located within the Aldabra atoll.

As a small island state Seychelles is vulnerable to negative impacts of climate change and is, therefore, increasingly committed to using blue carbon as a natural climate solution.

In its updated Nationally Determined Contributions (NDCs), the island nation pledged to protect at least 50 percent of its seagrasses and mangroves by 2025. This is seen as an effective nature-based solution to reduce 26.4 percent of the national greenhouse gas (GHG) emissions by 2030 and reach net zero emissions by 2050.

With these ambitious targets and to effectively capitalise on all its blue carbon potential, Seychelles has to strategically advance its research, engage its community, and ensure that blue carbon is part of its legal frameworks.

Ebrahim told SNA that these kinds of studies will give Seychelles a better local perspective of how much blue carbon is stored within its Exclusive Economic Zone.

"It will provide insights on the gaps of our knowledge, and lay out a roadmap on how best to fill these gaps and advance Seychelles towards venturing into Blue Carbon accreditation," he added.

The Blue Carbon roadmap has, therefore, laid out a number of objectives that should be met over a period of approximately five years, which will be presented to the government. Through it, local scientists are expected to be empowered to advance blue carbon science. The roadmap will be used to connect the Seychellois community to blue carbon, integrate it in national policy frameworks and connect blue carbon projects to carbon markets and other finance mechanisms.