One year after Haiti president assassinated, still no answers 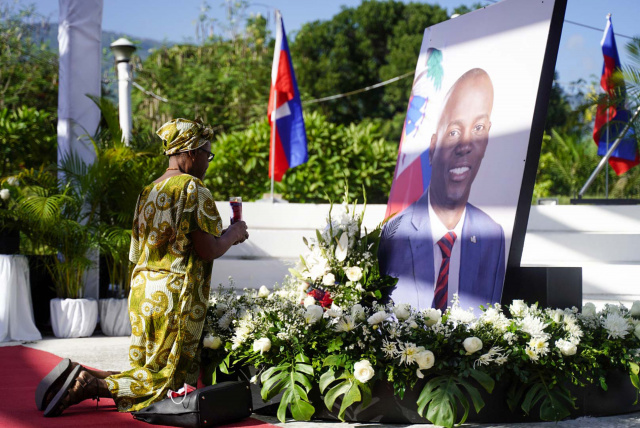 A supporter of Haitian President Jovenel Moise prays at a memorial marking the first anniversary of his assassination, in Port-au-Prince on July 7, 2022. Haiti marked one year since Moise was shot dead in his private residence, with no mastermind or motive for the attack identified, and the investigation stalled. Moise was assassinated in the early hours of July 7, 2021, when a commando group entered his bedroom at the house in Port-au-Prince and shot him 12 times. (Photo by Richard PIERRIN / AFP)

(AFP) - Haiti on Thursday marked one year since president Jovenel Moise was shot dead in his private residence, with no mastermind or motive for the attack identified, and the investigation stalled.

Moise was assassinated in the early hours of July 7, 2021, when a commando group entered his bedroom at the house in Port-au-Prince and shot him 12 times.

Haitian police quickly arrested about 20 people, including 18 former Colombian soldiers presumed to be hired as mercenaries.

But there has since been little progress in investigations in Haiti and also in the United States.

Prime Minister Ariel Henry, who was named to his post just two days before Moise's death, is suspected of speaking with one of the prime suspects via telephone soon after the attack -- a line of investigation which he has dismissed as a distraction.

Henry gave a speech on Thursday at a small ceremony that was boycotted by Moise's widow Martine, who was seriously injured in the attack.

"Despite weaknesses, the justice system must continue to do its utmost to track down the culprits, bring them before judges and impose exemplary sentences," Henry said.

"The death of the president must be the last act of a period of ignominy and intolerance."

Several thousand supporters of the late president demonstrated against Henry whom they accuse of being linked to the murder. Police prevented them from marching to the neighborhood where Moise was killed.

Complications in the investigation have piled up in recent weeks as the prosecutor's offices in the Haitian capital have been invaded by one of the gangs plaguing the country.

The United Nations office issued a statement on the anniversary, expressing concern over "lack of tangible progress" in the search for justice.

"Since this crime was committed, growing insecurity, linked to violence committed by armed gangs, terrorizes Haitian citizens and monopolizes public debate when challenges facing the country are increasing day by day," it said.

The United States issued a similar message urging Haitian authorities "to move forward with an independent and thorough investigation."

The inquiry's delays have also been worsened by Haiti's rolling political crisis.

The Caribbean island nation's presidency has been vacant since Moise's death, with no date set for a vote to fill the office.

Five successive judges have been in charge of the case, but none of them have issued any charges for the 40 people currently imprisoned.

Haiti's parliament has not functioned properly in two years, as Moise had not organized elections since he himself took office in 2017. And without a head of state to appoint judges, the country's judicial system has also flagged.

With confidence in their own government all but gone, many Haitians have instead placed their hopes on the American judicial system.

Three suspects have been charged in Miami, Florida, where Haitian police also say the plot originated.

Those suspects are Colombian Mario Palacios, who is believed to be one of the five armed men in the room when Moise was killed, Colombian-Haitian citizen Rodolphe Jaar and former Haitian senator John Joel Joseph.

A fourth man was arrested at an airport in Istanbul in November, though Turkish courts rejected Haiti's extradition request for him just this week.

Despite the case's progress in the United States, a judge in April ruled to seal the evidence, citing two of the suspects' previous involvement as informants for the US Drug Enforcement Administration and the FBI.

A Haitian judicial source, speaking on condition of anonymity, lamented the US move, telling AFP: "A whole section of this story will remain unknown."