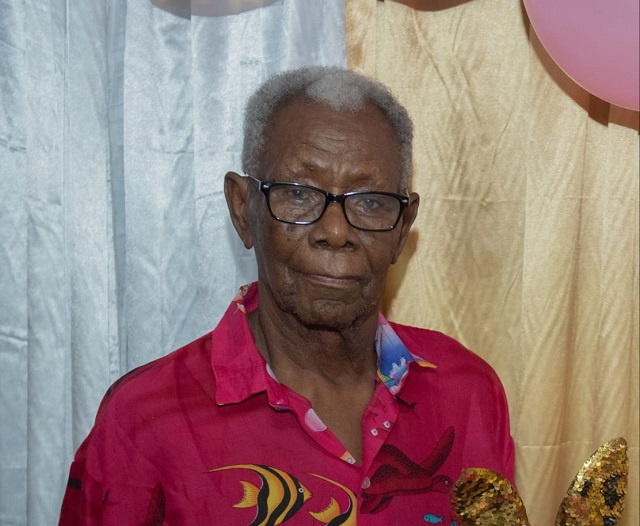 He was born on April, 16th 1935, on the island nation's third most populated island of La Digue and died on June 30. (Constance family)

Seychelles is mourning the passing of 87-year-old Antonio Constance, known popularly as 'Mazaren', a greatly respected conservationist and ardent protector of the islands' environment, species notably the Aldabra giant land tortoises. He was born on April, 16th 1935, on the island nation's third most populated island of La Digue and died on June 30.

Hailing from a humble beginning, Mazaren, a graduate from the 'school of life', had a vast knowledge of the islands, their fauna, and flora, including marine species. Mazaren had the chance to visit all of the 115 islands of the archipelago in the western Indian Ocean. Among his favourites were Cosmoledo and Aldabra – the latter being a UNESCO World Heritage Site where he met his wife, Alda, who was born on Aldabra and named after the atoll.

Mazaren is considered a legend and among his many adventures on the islands and waters of the Indian Ocean, he was the first Seychellois to learn how to scuba dive in 1956. He also met Frenchmen Jacques-Yves Cousteau – the French divemaster, oceanographer, filmmaker – who made the first underwater documentaries. This was in the 1950s on Aldabra, where Cousteau was making a documentary.

Marzaren also worked with the Islands Development Company (IDC) for 30 years, where he was involved in many activities such as fishing and the harvesting of the birds' eggs – a local delicacy.  He is credited to have been among the group of Seychellois who was involved with setting up of a research centre on Aldabra. The UK-based Royal Society recruited Seychellois to survey Aldabra and Mazaren was hired to be in charge of the Seychellois workers. He spent more than 10 years on the atoll.

Mazaren is remembered for assisting many scientists and researchers who came to the islands for research, including Dr Jeanne Mortimer.

"I met Mazaren on Cosmoledo in 1981 when I first came to Seychelles to study sea turtles. Having worked so long on Aldabra, Mazaren was comfortable with scientists, so it came naturally for him to help me with my work. He was a sea turtle expert himself, having spent so much of his life hunting turtles, and he was happy to share his extensive knowledge with me," said Mortimer in an eulogy she sent to be read at Mazaren's funeral.

Mortimer added: "We remained very good friends from 1981 until he passed, 41 years later.  In the 1990s, [Mr] Glenny Savy let Mazaren transfer from his job at IDC to work as my assistant for a year. In 1996, we chartered the yacht "Adelie" and visited all the outer islands to survey turtles. Mazaren loved to work. He set high standards for himself and put 100% effort into whatever task was at hand."

According to Mortimer, during the period that Mazaren spent on Aldabra he helped a lot of scientists study tortoises, crabs, sharks and all sorts of marine life.  "He is still remembered fondly and with tremendous respect by those scientists for his knowledge of Aldabra. To navigate around Aldabra one must understand the tides. Today modern people rely on tide tables. But Mazaren never used tide tables. He would look at the moon and know exactly what the tides were doing. This was a skill he taught himself through experience," said Mortimer.

One of Nature's Gentlemen: An outstanding seaman, patient and skillful

Mortimer who herself learned so much about the sea turtles and giant land tortoises from Mazaren. "He was an outstanding seaman and knew the outer islands of Seychelles better than just about anyone. In this regard, he was self-taught, having developed his skills through patient observation and life experience."

"He didn't like to hold grudges against people. He looked for the best in everyone, remembering the good times and never focusing on the bad. He always showed kindness and respect for others. He got on well with every type of person. Scientists who had worked with him at Aldabra used to say: "Mazaren is one of Nature's Gentlemen." In other words, he was a natural-born gentleman," said Mortimer.

Mazaren had excellent leadership skills and easily managed large work crews. He knew how to bring peace and calm when hostility erupted among workers on the islands. He dearly loved his family, was devoted to his friends and adored babies and young children. He had a great sense of humour and was upbeat, cheerful and always fun.

"Mazaren was one of the best human beings I have ever known. He was honest and unique, and his passing has left an emptiness that cannot be filled. He was well-loved during his life and will never be forgotten," concluded Mortimer.

Another scientist who Mazaren assisted and stayed in contact with is Professor Stephen "Rupert" Blackmore who sent a message to Mazaren's family who shared with SNA.

"Seychelles has lost a truly talented man, your family has lost a remarkable great-grandfather who was so proud of you all and I have lost a dear friend who I have known since 1976. I learned so much from working with Mazarin on Aldabra – I have often said he was a kind of professor for me – he knew so much about Aldabra,"  Blackmore said in his message.

Blackmore, who last saw Mazaren in 2019 when he came for a visit to the islands, explained that he had many happy experiences and memories working with Mazaren. "So I will choose to always remember the fishing trips, the times we spent together in field camps where Mazarin was a great storyteller. There was often music and dancing in Mazarin's house on Aldabra. They were great times. I will hold on to those very precious and happy memories," said the Professor.

Blackmore added: "I would like Mazarin's family to know that he was well known and held in the highest regard far beyond Seychelles, especially by scientists like me in countries around the world, not just the UK but the United States, Australia and New Zealand. I will never forget the great times we had together."

Len Mole another researcher who worked with Mazaren on Aldabra shared his admiration and respect in a message to his family. "It is no exaggeration to say that the success of the research station relied heavily on his knowledge, skills and judgement. He was a true leader and gentleman. This is a sad loss to all of you in his close family but also to us all in the bigger Aldabra family who so much depended on Mazaren, you and all the other Seychellois, who lived and worked on Aldabra with us years ago," he said.

The legend is survived by his wife Alda, to whom he was married for 62 years, and children. His funeral and cremation were held on Friday and, as per his wishes, his ashes will be scattered in the sea.