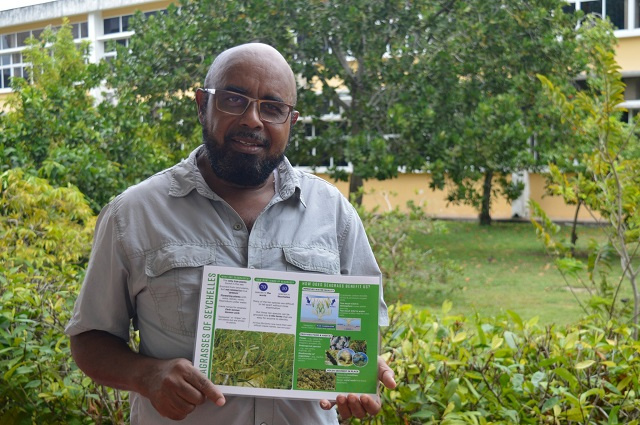 Terence Vel with one of the seagrass identification cards. (SeyCCAT)

A newly developed seagrass identification card given to citizen scientists, snorkellers, divers and marine researchers will allow Seychelles to learn more about the seagrass present in its waters and provide valuable data in conservation work.

Developed by the Seychelles Conservation and Climate Adaptation Trust (SeyCCAT) under the Coastal Wetlands & Climate Change project, the cards were recently presented to members of the public and the scientific community, the two main targeted groups.

Through the project, SeyCCAT is supporting the government in its efforts to put seagrass meadows at the centre of the island nation's endeavour to adapt to climate change.

The project will also have a global impact as it allows Seychelles to show the rest of the world how crucial the seagrass ecosystems are to halting climate change. It also emphasises the role and importance of seagrass in lowering the atmospheric concentration of greenhouse gases such as carbon dioxide,

The project, which highlights the importance of seagrass in reducing levels of greenhouse gases (especially carbon dioxide) in the atmosphere, has an international impact in that Seychelles can demonstrate to the world how important its seagrass ecosystems are contributing to reducing global climate change.

According to a press release from SeyCCAT, an initial batch of cards has already been handed to people involved in the conservation, education, and tourism sector.

Cards provided to the general public enable the identification of red, brown, and green algae and the five families of seagrass. Featured on the cards is basic information on the seagrass lifeforms, which include their English and newly identified Creole names.

The scientific community received cards that provide more information about the different seagrass lifeforms as well as benefits derived from seagrass.

The project manager, Annike Faure, outlined that "these cards reflect where we are at the moment in our understanding of seagrass in Seychelles."

"We are excited to share these with seagrass friends and enthusiasts in the country. The feedback we have had so far indicates that these cards will be extremely valuable in further conservation work. They round off the first phase of the project quite nicely where we have accomplished impactful developments in elevating the status of seagrass," she said.

The two ID cards were created at the end of the project's first phase, which saw significant advancements in seagrass research and community outreach. Seychelles' government announced its ambitious 10-year strategy to conserve its entire seagrass coverage in its Exclusive Economic Zone of 1.4 million square kilometres in its 2021 revised Nationally Determined Contributions (NDCs).

In order to map the nation's seagrass meadows and learn how much carbon can be absorbed by them, an exercise was initiated in the last quarter of 2021. To carry out this effort, SeyCCAT is collaborating with a number of regional and international partners.

Along with the scientific work, it was equally necessary to educate the public about the value of this coastal environment of marine life and the development of the country's economy. A nationwide campaign was launched to come up with terms in the Creole language for seagrass and its five lifeforms.

This exercise was finalised in April with the announcement of the new words and terms for seagrass officially finding their place in the Creole language.

Information provided on the seagrass ID cards was largely derived from the results of these exercises.