Biden takes off on historic flight to Saudi Arabia 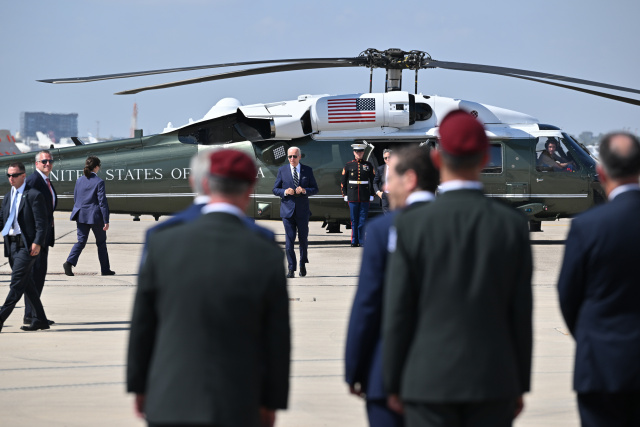 US President Joe Biden disembarks off the presidential helicopter Marine One as he makes his way to board Air Force One before departing Israel's Ben Gurion Airport on July 15, 2022. Biden is travelling to Saudi Arabia after two-day visit to Israel. (Photo by MANDEL NGAN / AFP)

(AFP) - President Joe Biden departed Tel Aviv on Friday aboard a historic direct flight from Israel to Saudi Arabia, the latest stop on his first Middle East tour as US leader.

Hours ahead of the president's arrival in Jeddah, the oil-rich Gulf kingdom changed its aviation rules in an apparent gesture of openness towards Israel.

The Saudi leadership paved the way for Israeli planes to use its airspace by announcing it was lifting restrictions on "all carriers", a move welcomed by Biden as "historic".

"Saudi Arabia's decision can help build momentum toward Israel's further integration into the region, including with Saudi Arabia," the US leader said.

Biden's direct flight is the first by an American president from Israel to Saudi Arabia.

Riyadh has long stressed its commitment to the decades-old Arab League position of not establishing official ties with Israel until the conflict with the Palestinians is resolved.

Israeli caretaker Prime Minister Yair Lapid said the decision to scrap airspace restrictions was "only the first step" as the country seeks to strengthen regional ties.

The president is also expected to meet Arab leaders from the Gulf Cooperation Council, who are gathering in the Saudi city, to discuss volatile oil prices.

With Palestinians banned by Israel from political activity in Jerusalem, the US president travelled to Bethlehem in the occupied West Bank to meet Abbas.

Standing alongside Abbas, Biden reiterated his commitment to a two-state solution to end the Israeli-Palestinian conflict and said there "must be a political horizon that the Palestinian people can actually see".

"I know that the goal of the two states seems so far away," he said in Bethlehem.

The Palestinian president said he was "taking steps" to improve the bilateral relationship and aimed to see the US consulate to Palestinians reopen in Jerusalem, which was shuttered by Biden's predecessor Donald Trump.

"The key to peace begins with recognising the state of Palestine," Abbas said.

With Israeli-Palestinian peace negotiations moribund since 2014, the US delegation has been focusing on economic measures.

During a visit earlier Friday to a hospital in Israeli-annexed east Jerusalem, Biden pledged a $100 million aid package for medical institutions in the area.

The US delegation also announced plans to roll out infrastructure for 4G internet across the Gaza Strip and the West Bank by the end of next year, fulfilling a longstanding aspiration among Palestinians.

But Biden made clear on Thursday he had no plans to reverse the controversial move by Trump to recognise Jerusalem as Israel's capital, which infuriated Palestinians who see its eastern sector as the seat of their future state.

Biden was greeted in Bethlehem with a billboard reading "Justice for Shireen", a reference to the veteran Palestinian-American journalist shot dead in May while covering an Israeli army raid in the West Bank.

Shireen Abu Akleh's family requested to meet Biden during his visit, but a senior administration official told reporters the president "is unable to do that," and noted that the family had been invited to Washington.

"I think if President Biden (can) find an hour and a half to go and attend a sport activity, he should have respected the family and give them 10 minutes to listen to them," said Samer Sinijlawi, chairman of a Palestinian nonprofit, the Jerusalem Development Fund, after Biden on Thursday attended a ceremony for Jewish athletes.

In Bethlehem, dozens of protesters gathered carrying pictures of Abu Akleh and signs against Israeli settlements in the West Bank.

Speaking alongside Abbas, Biden said the US "will continue to insist on a full and transparent accounting of her death."

Washington earlier this month concluded she was likely shot from an Israeli military position, but that there was no evidence of intent to kill.

Talks in Jerusalem between Biden and Lapid were focused on Iran's nuclear programme and its support for Islamist groups such as Hamas, which rules Gaza.

The two leaders signed a new security pact, in which Washington committed to using all its "national power" to ensure Tehran does not obtain a nuclear weapon.

Biden is currently trying to get the nuclear deal between Tehran and world powers back on track, after Trump's unilateral withdrawal in 2018 derailed it.

In a tweet on Friday, Iran's Foreign Minister Hossein Amir-Abdollahian said Biden's trip to Israel was a "puppet show" that made his country "more determined" to protect its nuclear interests.