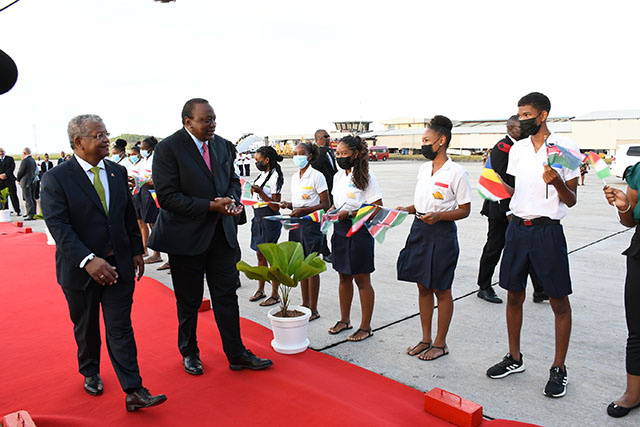 Kenyatta, who is heading a delegation of 64 members, was given a warm welcome by Rakalawan upon his arrival. (Seychelles Nation)

The President of Kenya, Uhuru Kenyatta, landed in Seychelles at 5.10 pm on Sunday for a three-day state visit at the invitation of President Wavel Ramkalawan.

Kenyatta, who is heading a delegation of 64 members, was given a warm welcome by Ramkalawan upon his arrival and received a bouquet of flowers from nine-year-old Nael Nanon of Pointe Larue primary school.

After the Seychelles National Brass Band played the national anthems of both countries, Kenyatta and Ramkalawan inspected the guard of honour under the command of Captain Dave Mathieu.

In an interview with the Seychelles Broadcasting Corporation (SBC), the national broadcaster, the Minister for Foreign Affairs, Sylvestre Radegonde said he hopes that this visit reinforces the relationship between Seychelles and Kenya.

"We will be signing several agreements in different areas such as port, police, defence, maritime security and agriculture. We expect to discuss all of this and others such as trade exchanges and what we can import from Kenya," he said.

Radegonde added that "we have talked a lot about the necessity to look at the African continent and countries in Eastern Africa and see what we can get closer to us and possibly cheaper. This will be part of the discussions to push the relationship further in every area."

While in Seychelles, an archipelago in the western Indian Ocean, Kenyatta will participate in several activities. He will have bilateral discussions with Ramkalawan on Monday at State House and attend an extraordinary session of Seychelles' National Assembly.

He will also participate in a tree planting activity at the Botanical Gardens and visit Vallee de Mai, one of Seychelles' UNESCO World Heritage sites, found on Praslin, the second most populated island.

Kenyatta, who is the fourth President of Kenya, has previously served as a Member of Parliament, Leader of the Opposition, Minister for Local Government and Deputy Prime Minister and Minister of Finance.

He was re-elected for a second and final term in August 2017. His presidency has been underpinned by a commitment to economic and social transformation, national unity, good governance, regional integration, and intra-Africa trade.

The Kenyan President currently chairs the African Union Peace and Security Council and the Summit of East Africa Community Heads of State.