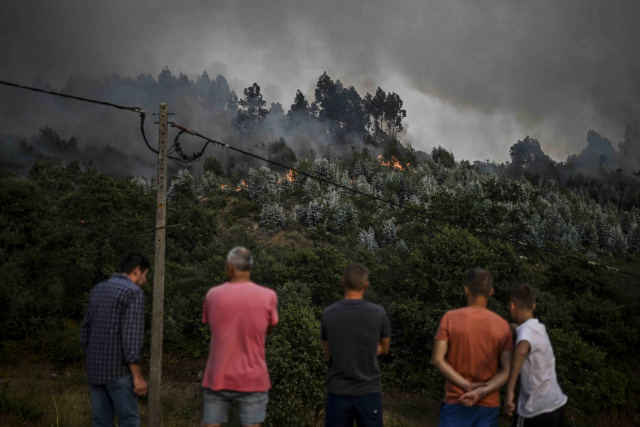 Villagers watch the progression of a wildfire at the village of Eiriz in Baiao, north of Portugal, on July 15, 2022. (Photo by PATRICIA DE MELO MOREIRA / AFP)

(AFP) - Firefighters struggled to contain wildfires sweeping across southwest Europe on Sunday as a heatwave showed no sign of abating, with Britain poised to set new temperature records this coming week.

Blazes raging in France, Greece, Portugal and Spain have destroyed thousands of hectares of land, forced scores from their homes and killed several emergency personnel since last week.

It is the second heatwave engulfing parts of southwest Europe in weeks. Scientists blame climate change and predict more frequent and intense episodes of extreme weather such as heatwaves and drought.

The wildfires have forced more than 14,000 people -- residents and tourists combined -- to decamp. Seven emergency shelters have been set up to take in evacuees.

Meteo France forecast temperatures of up to 40 degrees Celsius (104 degrees Fahrenheit) in parts of southern France on Sunday, with new heat records expected on Monday.

"The heat is intensifying. The heatwave is spreading across the country," the weather office said.

Authorities in the French Alps urged climbers bound for Mont Blanc, Europe's highest mountain, to postpone their trip due to repeated rock falls caused by "exceptional climatic conditions" and "drought".

The call comes after a section of Italy's biggest Alpine glacier gave way at the start of the month, killing 11 people -- a disaster officials blamed on climate change.

Spanish authorities reported around 20 wildfires still raging out of control in different parts of the country from the south to Galicia in the far northwest, where blazes have destroyed around 4,500 hectares of land.

Another fire burning in the Mijas mountain range inland from the southern coastal city of Malaga has so far destroyed about 2,000 hectares of land, local officials said.

The fire forced the evacuation of just over 3,000 people but around 2,000 people have since been allowed to return to their homes.

Spain's national weather office, AEMET, forecast "significantly high" temperatures for most of mainland Spain and the Balearic Islands in the Mediterranean on Sunday.

The mercury was expected to hit 42C in the northern city of Logrono and 40C in Madrid and the southern city of Seville.

A 60-year-old street cleaner in Madrid died on Saturday after suffering heat stroke the day before while working, local officials said.

The fight against the flames has also claimed the lives of a number of emergency personnel, including a pilot killed when his plane crashed in northern Portugal and two who died in Greece when their helicopter fell into the sea.

In Portugal, almost the entire country remaining on high alert for wildfires despite a slight drop in temperatures, after hitting 47C -- a record for the month of July -- on Thursday.

Only one major fire was burning on Sunday in the north.

The Lisbon government was to decide on Sunday whether to extend a week-long state of contingency.

In Greece, the civil defence service had brought a wildfire raging on the Mediterranean island of Crete since Friday under control.

In the United Kingdom, the weather office issued a first-ever "red" warning for extreme heat, cautioning there was a "risk to life".

The Met Office said temperatures in southern England could exceed 40C on Monday or Tuesday for the first time, leading some schools to say they would stay closed next week.