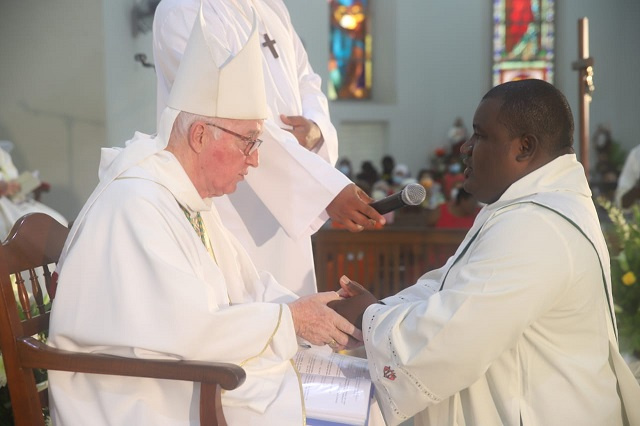 Father Romeo Bonne (right) took his vows on Sunday at the Immaculate Conception Cathedral in the presence of the Bishop of the Port Victoria Diocese, Alain Harel. (Joe Laurence, Seychelles News Agency)

(Seychelles News Agency) - The first Seychellois priest ordained in the Roman Catholic Congregation of the Holy Spirit on Sunday is headed for Cape Verde for his first missionary post.

Father Romeo Bonne took his vows on Sunday at the Immaculate Conception Cathedral in the presence of the Bishop of the Port Victoria Diocese, Alain Harel.

Also attending the ordination was Seychelles' President Wavel Ramkalawan together with Bonne's family members and parishioners from the various churches who have been involved in his journey up to his ordination.

Towards the end of his ordination ceremony, Bishop Harel revealed that the new priest's mission is in Cape Verde, an archipelago off the West African coast.

"The priest's first responsibility is to feed your parishioner's soul with the word of God. You will need to understand the culture, the history and the socio-economic realities of the country of your mission," said Harel.

Father Marc Botzung, who leads the Spiritan clergy in Seychelles' region said, "You will see that many things will remind you of Seychelles, but there are many new things you will also have to learn when there."

He advised Bonne that he will have to learn not only Portuguese but also the Portuguese-based Creole spoken in Cape Verde.

Speaking to the press after the ceremony, Bonne said, "I am now Christ's servant and I confirmed the choice I made."

As he is now a member of the missionary clergy, members of the Spiritan congregation do not work in their native lands and Bonne said that "this is not tragic, as I wanted to be a missionary and I have prepared myself that I would not be able to work in my country."

The Spiritan congregation is part of a Roman Catholic religious congregation founded in France in 1703 and is formally called the Congregation of the Holy Spirit.

Hailing from the southern Mahe district of Takamaka, Bonne joined the Spiritan congregation in 2017 after studying in Senegal. As part of his journey to join the clergy, he was ordained a Deacon in Dakar Senegal on August 14 last year after years of training.

He was the first Holy Ghost deacon to take his vows since the congregation arrived in Seychelles, an archipelago in the western Indian Ocean, on September 20, 2000.

The 32-year-old is also the first Catholic priest to be ordained in Seychelles, an archipelago in the western Indian Ocean, for over a decade. The last priest ordained in the island nation was Father Collin Underwood in August 2009.

To date, the congregation has nearly 3,000 priests, brothers and Spiritan associates. With missions in 60 countries around the world, including Seychelles, it is involved in many diverse ministries including education, parish work, and refugee ministry.

Seychelles is a predominantly Christian country with the majority of believers being Roman Catholic, followed by the Anglican Church and many other Christian denominations, as well as Muslim and Hindu believers.

General » Be a reporter: Write and send your article » Subscribe for news alert
Tags: Congregation of the Holy Spirit, Roman Catholic

50 years a priest: ‘I still have a lot more to give,’ says Seychellois Edwin Mathiot

The persecution of Christians, the world’s sufferings and hopelessness highlighted as Seychelles’ Christians celebrate Easter