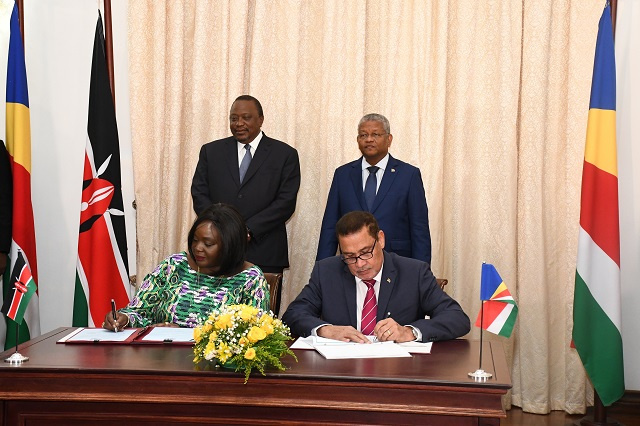 Seychelles and Kenya signed 10 bilateral agreements with the aim of enhancing cooperation between the two countries during a meeting between President Wavel Ramkalawan and his Kenyan counterpart Uhuru Kenyatta on Monday.

The agreements were signed in a ceremony at the State House in a bilateral meeting between the two leaders as part of Kenyatta's three-day state visit to Seychelles.

The cooperation includes defence, mutual legal assistance in criminal matters, peace, security and law enforcement at sea, maritime affairs, security and combatting crime. There are also agreements for cooperation in the blue economy, agriculture, livestock, tourism, sports, and the promotion of partnerships on gender equality and women's economic empowerment.

"Kenya and Seychelles had substantial bilateral cooperation in fields such as education, health, trade, agriculture, civil aviation, as well as strong people-to-people ties even before the establishment of diplomatic relations on 10 January 1990. Today we are strengthening these," said Ramkalawan, after the signing ceremony.

Ramkalawan added that "President Kenyatta and I have discussed the challenges that both countries face in the fight against drug trafficking and the challenges of maritime security. As regional partners and African leaders, it is our duty and in our mutual interest to work together on these issues."

Furthermore, Kenyatta said, "We look forward to the continued historic, cordial and diplomatic relations that have existed between our two countries since we became independent and over time this has been evident from the multiple cooperation agreements that our two countries have had and continue to engage in."

He added that during his bilateral meeting with Ramkalawan, discussions were held on tourism, blue economy, maritime affairs, and especially the re-establishment of sea routes between the two countries.

Seychelles' President also expressed his appreciation for the contribution of Kenyan nationals working in Seychelles, an archipelago in the western Indian Ocean.

There are over 800 Kenyan nationals living and working in Seychelles with most of them in the education sector. Around 65 Kenyans are teaching in primary and secondary schools and nine Kenyan are working as lecturers in tertiary education institutions.

Kenyatta, who is serving his last term as Kenya's president and will not be in the upcoming national elections, was asked just how much weight the new agreements hold, especially as he will be replaced as president in the coming months.

This is the first visit of a Kenyan head of state to Seychelles while two past Seychelles presidents have visited the East-African nation.

Diplomacy » Be a reporter: Write and send your article » Subscribe for news alert
Tags: bilateral agreements