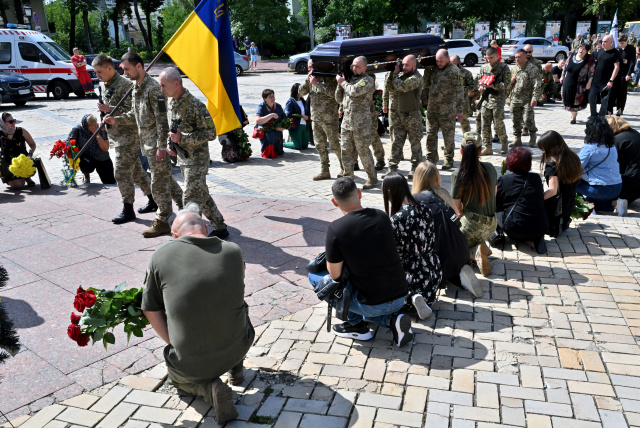 Mourners take to the knee as Ukrainian servicemen carry a coffin of an officer nicknamed Fanat during his funeral in Kyiv on July 18, 2022. Russian President Vladimir Putin on July 18, 2022 recognised two Moscow-backed rebel regions of Ukraine as independent, in a move that could set off a potentially catastrophic war with Kyiv's Western-backed government. (Photo by Sergei SUPINSKY / AFP)

(AFP) - Russian shelling of a town in eastern Ukraine on Monday killed six people, Kyiv said, as EU ministers meeting in Brussels insisted the pressure of Western sanctions on Moscow was working.

Rescue workers were digging through debris and clearing rubble from a collapsed two-storey building in Toretsk in the industrial east that was struck by Russian artillery early Monday.

"I had my windows open. There was a huge explosion around 5:00 am -- stones and dust," local resident Nadia told AFP journalists, still shaking.

Emergency services said five people had been pulled dead from the rubble, while a sixth, seriously wounded, had died in hospital.

Toretsk, a town of around 30,000 residents, lies 50 kilometres (30 miles) south of Kramatorsk, a key target for Russian forces, who invaded Ukraine in late February.

Russia's troops have made gains in the eastern region of Donbas recently, capturing the sister cities of Lysychansk and Severodonetsk.

On Monday, pro-Moscow rebels claimed their next target in Donbas -- the town of Siversk -- was under their control, an announcement that could not be independently verified.

Zelensky officially asked parliament to dismiss Bakanov later Monday, and the issue will be discussed at the next session for which a date has not yet been set.

Andriy Smirnov, a deputy head of the presidential administration told Ukrainian television that prosecutor general Iryna Venediktova and Bakanov had been suspended to prevent them "potentially influencing criminal proceedings against employees of the Security Service of Ukraine".

The night before, Zelensky said security officials were investigating more than 650 cases of suspected treason and aiding and abetting Russia, including 60 cases of officials in Russian-occupied territories working against Ukraine.

In Brussels, the EU's foreign policy chief warned Russia's blockade of Ukrainian ports was threatening grain supplies to tens of thousands of people vulnerable to starvation and said it must end.

"It's an issue of life and death for many human beings. And the question is that Russia has to de-block and allow Ukrainian grain to be exported," Josep Borrell told reporters.

Zelensky tweeted he had had talks with Brazil's President Jair Bolsonaro. "Discussed the importance of resuming Ukrainian grain exports to prevent a global food crisis provoked by Russia," he wrote.

Russian and Ukrainian negotiators are due to meet UN and Turkish diplomats in Istanbul Wednesday to try to agree an end to the months-long blockade of Ukraine's ports.

Borrell urged the EU not to falter on sanctions against Russia, insisting they were working, days after Hungarian leader Viktor Orban said the penalties were harming Europe more than Russia.

"It is what we had to do, and we will continue doing," Borrell said.

Ukraine Foreign Minister Dmytro Kuleba warned against "backing down and bowing to" Putin's demands "will not work, it has never worked."

Putin, meanwhile, vowed to overcome the high-tech problems caused by the sanctions.

"This is a huge challenge for our country," he told a meeting. "Realising the colossal amount of difficulties we are facing, we will look for new solutions in an energetic and competent manner."

"We will double the supply of gas from Azerbaijan to the EU," within several years she said after meeting with President Ilham Aliyev, a leader routinely criticised by rights groups.

A Ukrainian counter-offensive in the direction of encircled Black Sea ports has been gaining momentum.

With the delivery of long-range precision artillery to Ukraine by its Western allies, the battlefield dynamics in the south -- and in the east -- have shifted, say Kyiv and observers of the conflict.

Those weapons are a key concern for Russia, and Defence Minister Sergei Shoigu during a recent troop inspection said Moscow's forces had to set about neutralising systems such as US-supplied Himars.

In a BBC television interview broadcast Sunday, the head of Britain's armed forces, Admiral Tony Radakin, estimated 50,000 Russian soldiers had been killed or wounded in the invasion, with nearly 1,700 Russian tanks and some 4,000 armoured fighting vehicles destroyed.

But more than 20 weeks since the invasion began, Moscow said over the weekend it would step up its military operations.