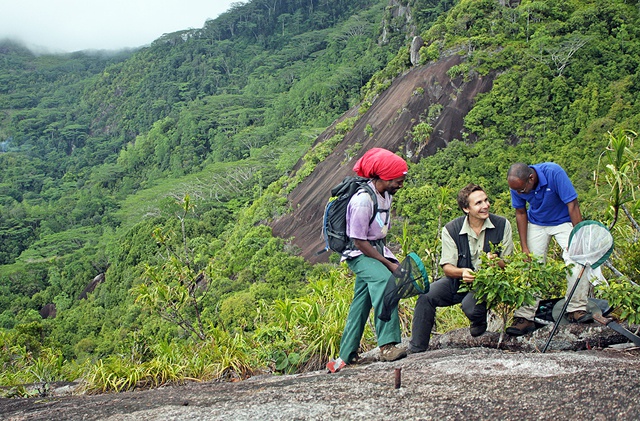 (Seychelles News Agency) - A new research paper has showcased how the management team of the endangered Coco de Mer palm in Seychelles has successfully brought scientific research and conservation policy and action together – a rare achievement in the world of conservation.

The paper, entitled ‘Scientists’ responsibilities towards evidence-based conservation in a Small Island Developing State’, was authored by researchers from the Seychelles Islands Foundation (SIF). It was recently published in the Journal of Applied Ecology and argues that conservation scientists must be prepared to collaborate and engage on a long-term basis with conservation practitioners and their funding agencies.

The lead author of the paper, conservation biologist Christopher N. Kaiser-Bunbury, has headed the Coco de Mer working group since 2008, and together with SIF CEO Frauke Fleischer-Dogley, conservation biologist and practitioner Nancy Bunbury and the Seychelles Environment Minister’s Special Advisor, Didier Dogley, the group came up with practical recommendations to reproduce this success for others.

The SIF is a public trust that manages the two UNESCO World Heritage Sites in Seychelles at the Vallee de Mai, Praslin and the Aldabra atoll.

Dr Kaiser-Bunbury says that he and his co-authors wished to reach out to other applied scientists and provide a blueprint for successful collaborations between academic scientists, government bodies and other stakeholders.

Speaking to SNA, he explained that this blueprint would allow all roleplayers in conservation to advance their knowledge on natural systems and use this knowledge to determine best conservation management practices.

“There are very few success stories out there in the applied conservation community, and even fewer apply in a Small Island Developing State context,” he said.

Generally, the PhD graduate from the University of Zurich said the problem was common and widespread due to the misaligned objectives between researchers and practitioners.

“Ecologists are primarily interested in investigating the most ecologically challenging or interesting questions while practitioners require fast and efficient solutions to an ecological problem,” he told SNA. “Close collaboration, communication and mutual respect and involvement can help to align these objectives and create a situation which is beneficial for all stakeholders.”

Dr Kaiser-Bunbury says there are many other examples of successful collaboration between researchers and conservation practitioners in the Seychelles.

For example, SIF is currently conducting habitat restoration projects; one tackling invasive species in the Vallee de Mai National Park on Praslin, and another on the highest peak of the main inhabited island of Mahé – the 905-metre high Morne Seychellois.

“In both cases the methods to restore native communities have been intensively researched prior the launch of the project and we use the outcome of the research to guide our restoration work,” he said.

“In my experience Seychelles ranks highly in the awareness and the attempts to implement evidence-based conservation,” said Kaiser-Bunbury. “It does not work in all areas and often efficient approaches are compromised, but generally there is a broad awareness of the benefits of scientific evidence in guiding biodiversity conservation.”

He cites the University of Seychelles as an example. The relatively-young institution is aiming to train environmental graduates to a high international standard by making used of the research infrastructure that is available in some environmental NGOs in the country.

“These synergies should be extended and long-term collaborations with selected universities abroad should be fostered to maintain a close research collaboration for the benefit of Seychelles' biodiversity.”

Despite these successes, the doctor says there is still a large gap at the moment between research conducted in Seychelles and the number of recommendations and practical conservation techniques derived from these findings.

“Although some scientists send their findings back to Seychelles – for example through the Ministry of Environment or the Seychelles Bureau of Standards – in the form of scientific papers, many of these results and/or recommendations do not find their way into mainstream ecological work in Seychelles,” said Dr Kaiser-Bunbury.

The reasons for this are diverse and listed in more detail in the paper, but the team has come up with a practical list of recommendations to overcome communication gaps in future.

The researcher says that although publication should be seen as an important step for action, it should not signal the end of a piece of research’s life.

“It is not the beginning, because a great deal of work goes into producing work that stands up to robust peer review, but it is also not the end,” he said. “Peer review should ensure a quality basis to results and recommendations, which must then be disseminated and ‘translated’ to reach a wide audience. This is not only the responsibility of the communication professionals but of the scientists and the practitioners that are involved in the work.”

Even with a peer review process, a multi-skilled policy management team and a framework in place to implement recommendations, Dr Kaiser-Bunbury says scientists can sometimes still get their findings or recommendations wrong.

“…this is why scientists usually talk in probabilities and use qualifiers when communicating findings. Ecological processes are highly complex and scientists can rarely study an entire ‘set’ of complexity,” he explained.

“That means scientists aim to describe a system to their best ability and knowledge, but we can never be certain that all processes are accounted for. We aim to do the best in a given situation by weighing up all of the evidence. This is why adaptive management is a crucial component of any conservation strategy.”

SIF’s coco-de-mer management group, which Dr Kaiser-Bunbury heads, is growing increasingly worried about a marked increase in coco-de-mer nut poaching. Less than a month ago, the distressed management team reported that around 18 nuts had been poached from the Vallee de Mai.

The erotically-shaped coco-de-mer nut is the world’s largest seed and is listed as ‘threatened’ on the International Union for Conservation of Nature (IUCN)’s Red List. The suggestively-shaped outer shells are sold as souvenirs for tourists and recently, the Ministry of Tourism and Culture began to promote the local consumption of the nut’s inner kernel, a move which has met with fierce opposition from conservation experts.

As it takes six to seven years for one coco-de-mer nut, which can weigh up to more than 35 kilograms, to mature, it is understandable that the coco-de-mer management group should be concerned about poaching and issues of sustainability.

When it comes to issues surrounding poaching, Kaiser-Bunbury said such “uncontrolled, destructive and harmful extraction risks the future of the species, its ecosystem and, consequently, to the entire tourism industry on Praslin.”

The team’s research shows that coco-de-mer palms require densely-forested stands to survive and reproduce, and if the coco-de-mer forests cannot be secured against poachers, the species could start to see a rapid decline.

As for the local consumption of the inner kernel, Kaiser-Bunbury feels it is inadvisable from both a scientific and managerial perspective, cautioning that it would increase demand beyond a sustainable capacity.

“Members of the working group met to discuss the issue of consumption and recommended no support for local consumption,” he said. “Several approaches are underway to address the poaching issue and a collaborative approach is being considered, including a surveillance system.”

“All Seychellois should work against the destruction of the coco-de-mer by poaching and other exploitative means,” he added.