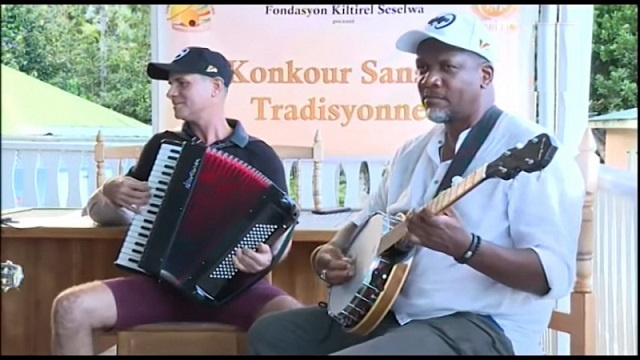 Volcy (right) at the launching of the traditional music competition for young people from 10 to 25 years old. (Seychelles Nation)

Launched in May, the competition is open to young people from 10 to 25 years old. The songs will be recorded in August and the grand final will be held in November.

The foundation was launched in October last year during the Festival Kreol [Creole Festival].

SNA met with the head of the foundation, popular Seychellois singer Jean-Marc Volcy, to learn more about its endeavours.

SNA: Tell us a bit more about the song competition?

JMV: The competition is only for traditional music such as polka, mazok, sega and moutya. It is now closed for new entries and we have received around 40 entries, which I think is quite good for a first attempt. We are still sifting through but so far, we have seen some new faces, we will know soon if there are some young people already in the industry who have also shown interest in the competition.

We have three categories for this competition 10-14 years old, 15-19 and 20 to 25. Now we want to work with the participants so that they may record their songs in August. We will then collect the recorded songs in October for judging before holding a grand final sometime in November.

We will hold a concert and promote the competition so that it may have national exposure. This will also give young artists the recognition they deserve.

In the future, when FKS organises activities, these young artists will have a platform where they can perform. Who knows we might even feature them on FKS albums.

We will also hold a workshop soon to arm them with the skills they will need to create this kind of music.

SNA: Tell us about the Foundation and what is the next step?

JMV: We started last year and our first activity was our launching at the Festival Kreol at Beau Vallon in October. We have planned a series of recreational programmes to bring the culture closer to the public.

When we set up the FKS which includes well known people on the local cultural scene such as John Etienne and Patrick Victor. We also have people who are associated with us such as Jany de Letourdie [local singer] and Penda Choppy [director of the Creole Language & Culture Research Institute at the University of Seychelles] and we have joined forces to give our culture a boost and bring it back to life. There are no formal events being held to promote the local culture and make it alive for them in the country.

SNA: What other plans do you have to promote Seychellois culture?

JMV: We have Radio Tant Dada, a programme being aired on Telesesel at the moment where we address cultural problems the country is currently facing.

We have talked about music on Baka - which is one of our cultural heritages and we plan to have many more of these programmes to follow, which will talk about writers and local witchcraft among many other topics we feel touch the nation.

For the youth, we have launched a traditional songs competition. We will be meeting the youth to explain our expectations to them.

SNA: Do you plan to include these programmes on the national media as well?

JMV: We intend to air these programmes on SBC, the national broadcaster, in the future, but since I believe these current programmes are so open, there might be topics that may not be aired. We plan to go back to the SBC with a programme that is more in line with its style and audience.

The only reason we went to the private sector is that we wanted the freedom to say whatever we wanted, as long as we do not insult or offend anyone.

SNA: Is the Foundation targeting the musical aspect of the Seychellois culture or will you be looking at others?

JMV: The foundation has painters as its members such as Nigel Henri and other people who work with the arts here. We do not have any boundaries. We are doing everything that will help propel the Seychellois culture to where it should be. We also have the Tant Dada programme that will include poets and writers, when we talk about culture, we mean art and culture in general.

SNA: Seychelles has three national languages. Will the Foundation use all of them equally or will you be advocating more for the Creole side?

JMV: We are working more to encourage our artists to use more of the Creole language - especially on the radio and television. I believe television is a medium where we hear people speaking every day. What we have noticed in the Foundation is that we have three official languages here, but when you tune in to the news you have people speaking perfect English for the English bulletins the same goes for the French. However, when it comes to the Creole bulletin, people mix languages when doing so, so much so that it becomes disrespectful to the language. This is what we want to remove from the use of Creole.

We have a lot of work ahead of us but as a Creole nation that at some point in its history has been classified as the Creole capital of the world, we should not be comfortable misusing the language.

If there is something that happened along the way, disrupting the way we use our language, our Foundation is working to bring this to the attention of the public so that we may work to solve the problem.

It is also important to work with the older generations who are well versed in our local culture - while they are still alive.

SNA: What is the Foundation planning to do on that front?

JMV: We want to work with both generations so that the elders may share their knowledge and information with the youths. I also believe that the local media must take the necessary steps to teach its professionals the right way to speak and write the language.

SNA: Is the Foundation funded by the state or is it a private entity?

JMV: We are a non-governmental organisation but receive loads of support from the government, however, the Seychelles Cultural Institute helps us a lot.

We are also receiving support from local TV station Telesesel and other businesses like Maz Millions, which are helping us to launch the song competition.

We are knocking on many doors for sponsors and although it is difficult at the moment, we feel the interest out there. Many people are willing to do their part to help promote our culture.

SNA: Where do you see the Foundation going in the long term?

JMV: We have a five-year plan, which details what we want to achieve, and this will bring awareness to the people that culture is for each and every Seychellois.

I think there has been a tendency to believe that the ministry is the one responsible for culture and others like Patrick Victor, Brian Matombe and myself. No! Culture is something we should be practising every day and not wait for the Creole Festival in October to look for things associated with Seychellois culture. It is not only during that time that we should be looking for Kat Kat banann in stalls, but as we have bananas available all the time, we should find a way to cook them at home and live our culture.

We will also have programmes that we plan to take to the districts in the country where we will hold workshops to pass on such knowledge as cooking typical Seychellois cuisine.

So, we have the entertainment aspects and educational aspects that we wish to address. We will be going full steam ahead in our mission of reviving the creole culture.

The Foundation is also planning to go to the school just like with the traditional music competition we want to include schoolchildren. We realised that there are youths who are now in the music industry because of the advancement in technology.

In the past, the same youngsters would have had to learn how to sing or play an instrument with their uncle or any other musician relative of theirs. While it is easy to buy an instrument and put your voice to it and have a song, traditional Seychellois music has not yet reached that level. We are also faced with a lack of traditional musicians. So, we are starting by bringing forth such talents through this competition.

The Interview » Be a reporter: Write and send your article » Subscribe for news alert
Tags: Fondasyon Kiltirel Seselwa