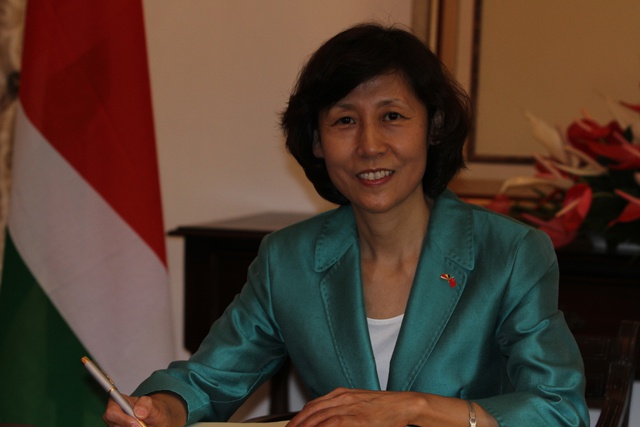 (Seychelles News Agency) - A new Chinese ambassador, Yin Lixian has been accredited to Seychelles vowing to work towards bringing the desired relationship between the two countries to the next level.

Yin said this in an interview with the local press at State House in the Seychelles capital of Victoria this morning after she had presented her credentials to President James Michel.

"…During my discussions with President Michel we exchanged views on many issues, especially the relationship between China and Seychelles. We both expressed our satisfaction due to the fact that the relations between our two countries have been very fruitful in recent years,” Yin told journalists.

“During my tenure I will work closely with my Seychellois counterparts to deepen and strengthen the existing friendship and excellent cooperation that exist between our two countries and their people particularly in the areas of tourism (by increasing the number of Chinese visitors to Seychelles) and the blue economy, which in my opinion presents many opportunities.”

Tourism is already an area that has witnessed considerable improvement between Seychelles and China with an increase in the number of Chinese tourists to the Indian Ocean archipelago since the beginning of this year.

Visitor arrivals from China hit the 10,000 mark in September for the first time in the history of the Seychelles tourism industry and the Asian nation is currently the island nation’s fourth leading market with 11,939 visitors.

Tourism is an area of cooperation with the potential to be further developed which the Seychellois Head of State also discussed with the newly accredited Chinese ambassador along with trade and investment.

In a press statement issued this afternoon, State House said Michel took the opportunity to thank China for its continuous support provided to Seychelles in terms of infrastructure and socio-economic development.

Both Michel and Yin also welcomed the different exchange programmes that exist between the two sides as well as the continued promotion of the Chinese culture in Seychelles.

“During their meeting the Seychellois Head of State and Ambassador Lixian exchanged views on bilateral relations as well as on African and international issues of common interest,” reads the statement.

Ambassador Yin Lixian who is based in Seychelles replaces Shi Zhongjun the former Chinese ambassador to Seychelles who left for Beijing recently after his three year tenure.