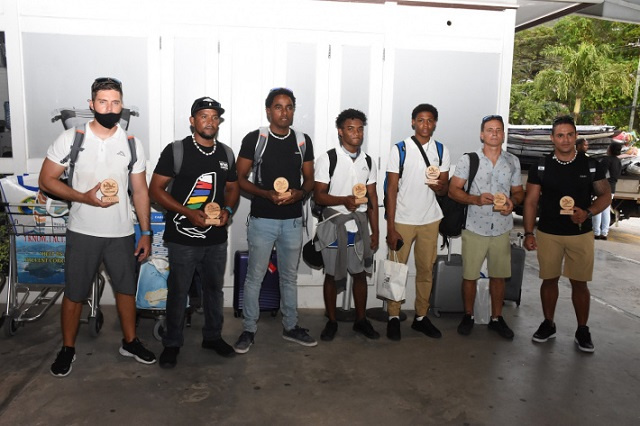 The Seychelles' team with their medals returned on Wednesday. (Seychelles Nation)

Seychelles participated with a team of seven, which included windsurfers and two kite-surfers competing for nine days of slalom races and GPS speed racing.

Gardette said that the competition "was quite hard, especially with the harsh weather conditions and strong winds, but we did our best and beat two top Mauritians, whom we had never beaten before, so I am very proud of that."

He added that Seychelles had been looking for that overall title for seven years and finally managed to get it.

In third place, Languilla said, "We went there with a good level of determination and despite it being hard, we gave it our best and came away with the results."

In the junior category, Walter Esther finished second place and said he is quite happy with his performance, especially as it was his very first time competing at the international level.

In kite surfing, Seychelles was represented by Mathieu Ferrari who took second place and Neddy Radegonde who took fourth place.

Kite surfing is a new sport activity in Seychelles, an archipelago in the western Indian Ocean, and Ferrari is calling on more youth to join.

"It's a very good sport and I want to encourage more young people to join as it is taking over the world at the moment," said Ferrari.

The team returned on Wednesday and was congratulated by the vice chair of the Seychelles Yachting Association, Lucy Athanasius.

"We would like to congratulate all our participants. They have done really well despite the heavy wind. They made a fantastic performance and we are very proud of them. This is the first time we finish overall in the MAC competition," Athanasius told SNA on Thursday.

She added that "we would like to encourage them to keep it up as we see they have the potential to do even better."