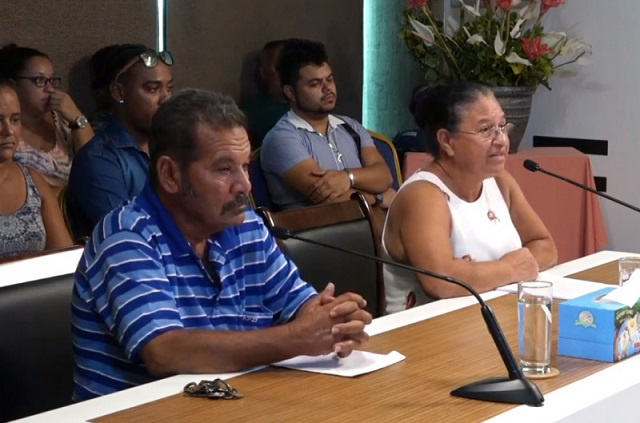 (Seychelles News Agency) - The Truth, Reconciliation, and National Unity Commission (TRNUC) in Seychelles was set up in 2018 to work on settling past political divisions and grievances that were a result of the coup d'état in Seychelles on June 5, 1977, as well as other human rights abuses from then until recent history.

TRNUC's mandate is coming to an end in August 2022.

SNA spoke to Maryse Eulentin who brought forth her case for the murder of her son Dhamendra Eulentin in 2007 to seek her views on the outcome of the TRNUC proceedings.

SNA: How did you find the initiative to address what happened to your son?

ME: For me, this is a good initiative to establish TRNUC. Despite the fact that it has opened a lot of wounds and brought out some past sufferings, it has brought some sort of relief to the victims and this is good.

TRNUC is doing a great job, an intense one if I should add. There are certain things that as a nation, we didn't know had happened or had taken place in such a small country as Seychelles. I feel that there are so many things we haven't had the chance to know as some people are scared to come forward to tell their stories.

Personally, TRNUC has helped me a lot and has allowed me to see a lot of things. In the past, even before my son was killed, when I heard that a person had lost their child, I felt the impact, but when it happens to you it is only then that you truly feel it.

SNA: In the case that you brought before the Commission, are you satisfied with the way events have unfolded and have the interaction with the perpetrators brought out the truth you needed?

ME: No. It hasn't been the case for me. I was not satisfied with the perpetrators because no truth came out. They depended on each other - when one cannot answer a question, he looked at the other one. It was like something that was rehearsed rather than something coming from the heart.

That is why I could not find the strength to forgive them. Maybe I had come with the intention to forgive them. But when I heard the things they were saying when I showed the photo of my son with signs of the torture which they said had been caused by fish, it didn't sound like the truth.

SNA: How do you feel about the fact that all evidence provided before the commission cannot be used to put together a civil case against perpetrators?

ME: I feel that these people should be behind bars. Even if you forgive them, the law should come in - they came forward and confessed. Furthermore, I do not think that only these three people were responsible, others were involved.

Personally, I do not think that they should have been given the option to seek amnesty. Only one family forgave them.

People who have committed several murders cannot go unpunished. When the murders had just happened, the police started an investigation. They got all the information they needed to bring a case to court, it was the state that stopped them from doing so. I think that if the police go back and do their job, they can reopen these cases. Where are the case files?

SNA: What are your views on the debate among the general public on the subject of the monetary reparations for the victims coming from the government.

ME: At the start, when we didn't know who had done this, the perpetrators had been paid to do the job and a very good lump sum of money at that. The government of the time was using taxpayers' money to do so. It came from the coffers of the government.

The state, regardless if it is the former, present, or future one, will have to take the responsibility to pay the victims. Then again, even if we get that compensation, it won't bring back the life of that person, no matter the sum. It is a wound that will never heal.

The perpetrators are at large. When you see them in the street, they are happy and you are walking with a trauma, it is not fair. I feel that the perpetrators should also pay compensation. Many of them were paid by the previous government to carry out these murders. Even if they said that it was former president Albert Rene who sent them to kill my son, that is not the truth. It was the government of James Michel that was in power. Following the death of my son, I went to see Michel and I pointed out that even if it was not your hands that killed him, the order came from you. He was not happy about it and 20 minutes later after I left, I got a call asking me to leave the country. I was told that he was going to get Jemmy [Marengo] to kill me and he truly was stalking me. I had to go into exile and leave my family behind. This was another suffering for our family.

SNA: Why are you and the others asking that the mandate of TRNUC be extended?

ME: There are things that will come up in the future and we will need TRNUC. TRNUC is coming to an end but our situation has not been clarified. If ever we need a piece of information and the commission has been closed, where will we go?

Our cases are still ongoing, forgiveness has not been given and the perpetrators will be granted amnesty, what if something else happens? I feel they should continue the work for another three years. We are also asking them to continue working because some people were scared to come forward but having seen how we have paved the way, will provide them with the courage to come forth.

SNA: In the amnesty hearing, TRNUC said that the perpetrators were executing orders and did not have a choice. What are your views?

ME: I do not agree. Even if they were in the army and were forced to do these things, they could have found another way. In the case of Marengo, he was like a brother to me, and an uncle to my deceased son. We grew up together. He could have alerted us and we could have had my son leave the country. He could have done this, there were options, as he was close with our family.

SNA: Is there anything that you would like to add?

ME: I think that it would be a huge step for the current government to take action against these perpetrators - bring them to justice. They need to be punished. President Ramkalawan is a person who has fought a lot on such things in the Assembly, asking that the victims be compensated.

I sincerely thank those who have taken the initiative to put together TRNUC. It has opened the eyes of many people despite opening wounds that were healing.

I also thank the team at TRNUC, journalists who have kept the people informed on what was happening.

Editor's Note: Former President James Michel on June 8 denied the allegations and said he was not involved in any manner whatsoever in the illegal act committed by any of these individuals.

The Interview » Be a reporter: Write and send your article » Subscribe for news alert
Tags: TRNUC proceedings