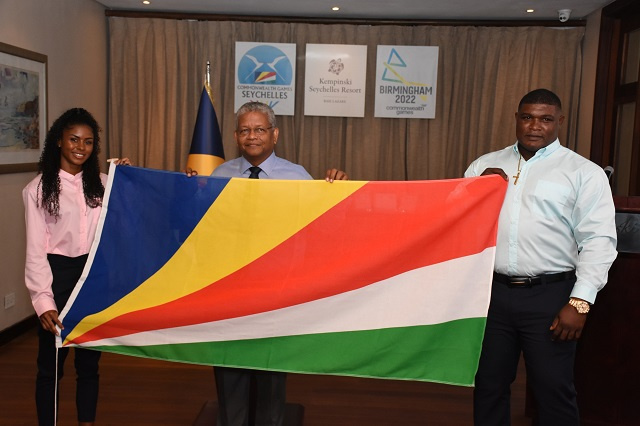 (Seychelles News Agency) - The Seychelles team is heading to the Commonwealth Games in Birmingham, UK, with a quest to get a first gold medal, following its official send-off on Thursday at the Kempinski Seychelles Resort.

The Seychelles' team of 46, which includes 27 athletes and officials will leave on Sunday, July 24, for the multi-national sports events which will start on July 28 and end August 8.

Ramkalawan wished all the athletes good luck and thanked all the coaches and officials who have worked with the athletes to ensure they are ready to perform.

"When you are at the games, you should not be worrying about anything back home and just concentrate on giving your best effort. We will be the ones thinking about you and willing you on, as each of you seeks for the first ever gold medal for Seychelles," said Ramkalawan.

The president also presented the team with a set of uniforms to wear for the opening ceremony.

In her address, the sports minister, Marie-Celine Zialor, said, "We have won the bronze medal and also the silver medal at these games before, now we must look for the colour that we have not won yet, which is gold. I am already in the mood and I know nothing is impossible as we look for the gold medal."

The president of the Seychelles Olympic and Commonwealth Games Association (SOCGA), Antonio Gopal, asked the participants to stay focused as these games are also a stepping stone towards that elusive Olympic medal.

"I want to congratulate all athletes heading to the games and I feel that you have the capacity and ability to win a place on the podium," said Gopal.

Seychelles, an archipelago in the western Indian Ocean, first participated in the games in 1990, in Auckland, Zealand. The island nation won its first medal at the following games in Victoria, Canada in 1994, when boxer Rival Payet won a bronze medal.

Seychelles did better at the next games in 1998, winning two silver medals in the games held in Kuala Lumpur, Malaysia again from boxing through Jerry Legras and Roland Raforme.

The other Commonwealth Games medallists for Seychelles are weightlifter Janet Thelermont, who won silver in 2010, in Delhi, India, and silver at the 2006 games in Melbourne, Australia, long jumper Celine Laporte in 2006, and boxer Keddy Agnes in 2018.

Agnes still has a shot at winning gold in this edition of the Commonwealth Games. Seychelles' expectation of a medal will also be from weightlifter Clementina Agricole who came out fourth in Glasgow in 2014.

One notable absentee from the Seychelles team, however, is top swimmer Felicity Passon, who is on overseas studies.

Sport » Be a reporter: Write and send your article » Subscribe for news alert
Tags: Commonwealth games