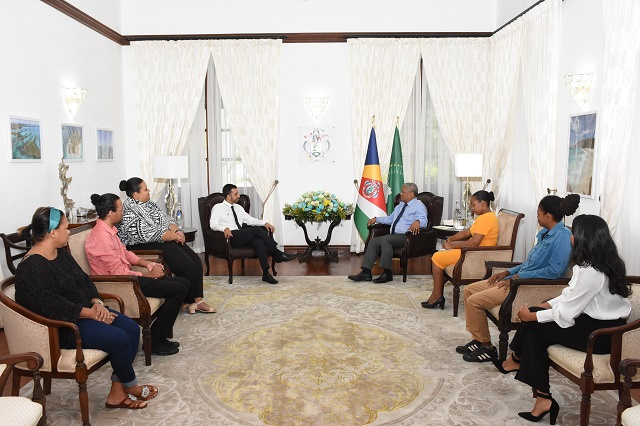 The LGBTI Sey met with Ramkalawan on Thursday. (Seychelles Nation)

(Seychelles News Agency) - The recognition of same-sex marriage, rights to adoption and the possibility for a person to place the gender they associate with on the Identification Card were some of the topics raised in a meeting between Seychelles' president, Wavel Ramkalawan and LGBTI Sey on Thursday.

The secretary for the LGBTI Sey, Sasha Alis, told the press that the topics raised focused on matters that are currently affecting the LGBTI community in the island nation.

“We spoke mostly about people who are already married, having done so overseas with both either being Seychellois or one Seychellois and the other an expatriate. Marriage is recognised internationally but we also want recognition here in Seychelles,” said Alis.

She added that the president said there nothing  in the law that prevents this and that “it is just a matter of looking in the civil status office to see that they get access to the necessary documents. Furthermore, we have a person on the board who knows the law really well and who works at the magistrate court.”

Alis said that often “we see that people working in the public service sector are not aware of what the law states and they should also get the training to understand that they should not block a person because of their sexual orientation.”

On the topic of child adoption for same-sex couples, it was outlined that according to Seychelles' laws, living conditions and situations is closely looked at when a couple is looking to adopt a child.

“Your capability to be a good parent is not related to your sexual orientation," said Alis.

Describing the meeting with Ramkalawan as a historical moment for the LGBTI group, Alis said that the board shared their concerns about how children in school who identify themselves as another gender are treated, and access to HIV treatments for members of the community.

She outlined that the board of LGBTI Sey will continue its work with other partners and stakeholders to pave the way forward for the LGBTI community in Seychelles.

“We want to educate people more on the matter, so that everyone, regardless of their sexual orientation or gender, is not marginalized or left behind. The president reaffirmed these points," said Alis.

Seychelles amended the Penal Code in 2016 to decriminalise the act of sodomy. The decision was seen as a milestone in the predominantly Catholic country and the biggest achievement for LGBTI Sey.