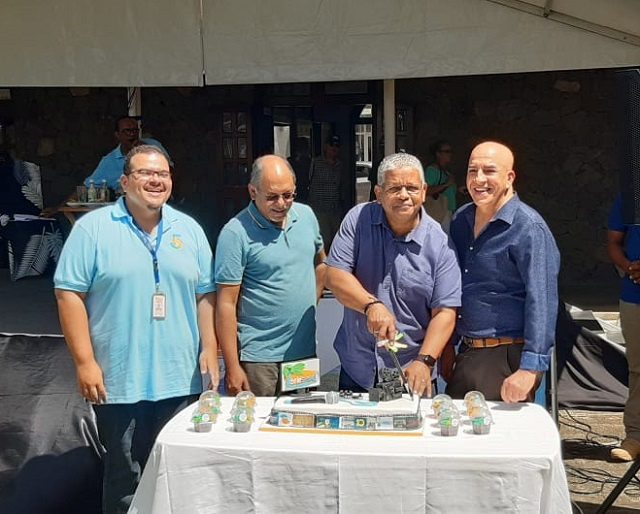 To mark five years of existence, TeleSesel held a commemorative live event at the Camion Hall in Victoria, Seychelles' capital.

The highlight of the event was the recap of the journey made by the team who has been with TeleSesel since they began telling their side of the story.

President Wavel Ramkalawan attended the event and cut the anniversary cake alongside the owners of TeleSesel.

TeleSesel is owned by Cable and Wireless but managed by Clive Camille and Gilmer Philoe owners of Radius Studios. It was conceived in 2016 and on May 11th 2017 made a soft launch with the Cable and Wireless Seychelles company and the channel started broadcasting.

SNA met with Camille to learn more about the journey of TeleSesel.

SNA: When did you get the idea to start TeleSesel?

CC: The idea came to me when I was studying in Malaysia around 2015. Gilmer and I started an advertising business concentrating more on television content called Radius Studios.

When I returned to Seychelles, I worked full-time in this business, and with Gilmer still working for the Seychelles Broadcasting Corporation (SBC) at that time, I produced mostly adverts and documentaries and televised programmes for the ministries of tourism and agriculture.

One day we were filming a concert for Cable tunes and Cable and Wireless told us that there was a vacant space on its IPTV platform and they wanted to fill it up with local content. They asked Gilmer and me to come up with something local to compliment what they already had.

After several meetings conducted over a year, we engaged in a partnership with Cable and Wireless and made the project proposal of TeleSesel.

We wanted to come up with more local content on Seychelles culture, its people and things around us. All our programmes were in Creole compared to SBC back then, which had many international contents.

SNA: What have you accomplished during the five year?

CC: We made a big transformation in the media industry in Seychelles. For example, when we started there was no breaking news on social media. We offered high-definition quality images, a benefit we had with the IPTV Cable and Wireless platform.

TeleSesel has set the bar high in the industry in terms of quality news and TV programmes that we produced locally and I believe that our team has raised the public's expectations.

We have been able to beat our direct competitor in their own survey and this shows that we have made an impact on the population.

SNA: How would you describe the journey of TeleSesel so far?

CC: We came across many challenges that we had to overcome, it wasn't easy to create and manage this project. It was the first time a commercial TV was set up in Seychelles.

There was no example for us to follow or copy from so we had to start from scratch and even do research about Nigeria's and South Africa's success stories. All I could do was read about it. When we started, we fixed things as we went along and learned about whatever was missing.

This journey has also been an adventure and has allowed our team to discover a lot of things about the population and what they want to see.

We now have more competitors such as WhatsApp and Facebook that are more interactive and rapid with the sharing of information.

SNA: Moving forward what are your expectation for TeleSesel?

CC: I want TeleSesel to continue to give credible information and set the bar higher for the others who will come after. We wish to be an example for people and entertain our viewers.

We are not perfect. We will continue to improve but we are optimistic that TeleSesel will remain open.

SNA: People complain about the repetition of programmes four times a day, what is your reaction?

CC: The format we came up with is an international format, programmes are repeated every six hours. It is a template we have taken from OSN [Orbit Showtime Network] and Mnet. These are two major international channels that Seychellois are already familiar with and they use it. We are no different.

We have limited resources and we are doing our best. It takes a lot to produce one programme. We are now producing and broadcasting a programme per week whereas before we broadcast a programme per month.

We have tried our best to create a variety of programmes. And this is one of our greatest accomplishments. We have made many live events as well.

SNA: Do you plan to expand TeleSesel in the future?

CC: There are strategies to do better but our aim is to make this station more profitable. We would like to inform the advertisers that we have made it this far, five years and that they can count on us and believe that we will be around for a while.

We are offering new advertising rates at a competitive price as of this weekend to give people more airtime to advertise their products so we hope to get more customers in order to increase our profit share.

The Interview » Be a reporter: Write and send your article » Subscribe for news alert
Tags: Cable and Wireless Seychelles, Radius Studios