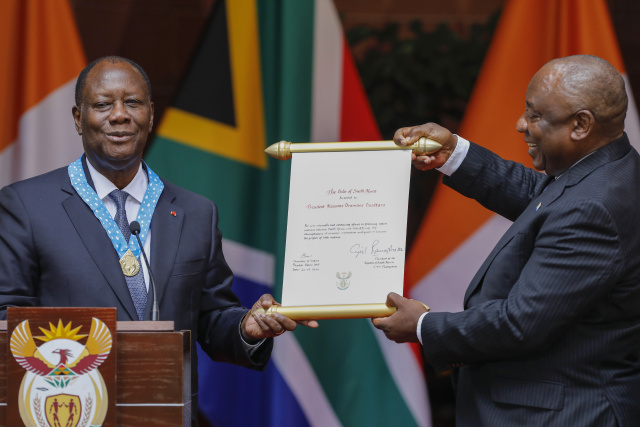 President Cyril Ramaphosa (R) congratulates President of Ivory Coast Alassane Ouattara (L) after bestowing him with The Order of South Africa during his state visit at the Union Buildings in Pretoria on July 22, 2022. Ramaphosa and Ouattara held bilateral discussions, witness the signing of a number of agreements and address a South Africa - Ivory Coast Business Forum. Bilateral relations between the two countries are managed through the Joint Commission of Cooperation (JCC), established in December 2015, as a structured bilateral mechanism to facilitate political, economic, social, cultural, scientific and technical cooperation between the two countries. (Photo by Phill Magakoe / AFP)

(AFP) - The Ukraine grain crisis should act as a "wake-up call" for Africa to become self-reliant in producing cereals and fertilisers, South African President Cyril Ramaphosa said on Friday.

Russia's invasion of Ukraine in February has prevented millions of tonnes of Ukrainian wheat and other grain from leaving the country's ports, sparking fears of global shortages.

Ramaphosa spoke as Russia and Ukraine on Friday penned a landmark deal with the United Nations and Turkey to unblock Black Sea delivery routes, which could ease the global food crisis.

"Do we want to continue for years to come to rely, for our grains, for our fertilisers, on that part of the world?" he said at a press conference in Pretoria as Ivory Coast's President Alassane Ouattara visited.

"Or should we say this conflict is a wake-up call like Covid became a wake-up call to many of us on the African continent to start producing our own vaccines?"

Ukraine's farms are a major source of grain for the world market, in particular in the Middle East and Africa, where food supplies are critically tight.

Cereal prices in the world's poorest continent have surged because of the slump in exports, sharpening the impact of conflict and climate change and sparking fears of social unrest.

Speaking alongside Ramaphosa, Ouattara said he told Ukrainian President Volodymyr Zelensky in a phone call earlier this week that Africa should be prioritised as shipments resume.

Ukraine and Russia and two of the world's largest grain producers.

But Ukrainian mines laid across the Black Sea to avert an amphibious assault, as well as Russian warships, have blocked exports from Ukraine, leaving up to 25 million tonnes of wheat and other grain in danger of rotting in ports and silos.

Friday's deal establishes safe corridors along which Ukrainian ships can come in and out of three designated Black Sea ports in and around Odessa.

Russia has in recent months struggled to sell its crops and fertilisers because of Western sanctions affecting the financial and logistics sectors.

Africa needs to start producing its own fertilisers, Ramaphosa said.