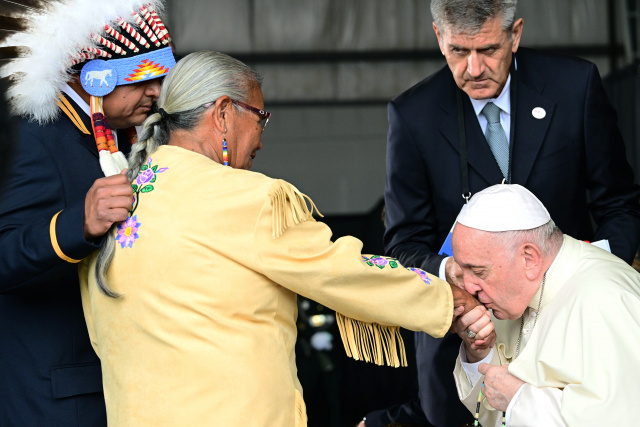 Pope Francis greets members of an indigenous tribe during his welcoming ceremony at Edmonton International Airport in Alberta, western Canada, on July 24, 2022. Pope Francis visits Canada for a chance to personally apologize to Indigenous survivors of abuse committed over a span of decades at residential schools run by the Catholic Church. (Photo by Vincenzo PINTO / AFP)

(AFP) - Pope Francis will visit a former residential school in Canada on Monday, where he is expected to make a historic personal apology to Indigenous survivors of abuse committed over decades at the Catholic-run institutions.

The leader of the world's 1.3 billion Catholics arrived the previous day in Edmonton for a six-day visit, which has long been awaited by the First Nations, Metis and Inuit communities.

The 85-year-old pontiff's trip, which he has described as a "penitential journey," is primarily to apologize to survivors for the Church's role in the scandal that a national truth and reconciliation commission has called "cultural genocide."

From the late 1800s to the 1990s, Canada's government sent about 150,000 First Nations, Metis and Inuit children into 139 residential schools run by the Church, where they were cut off from their families, language and culture.

Many were physically and sexually abused by headmasters and teachers, and thousands of children are believed to have died of disease, malnutrition or neglect.

A delegation of Indigenous peoples traveled to the Vatican in April and met the pope -- a precursor to Francis' six-day trip -- after which he formally apologized.

But doing so again on Canadian soil will be of huge significance to survivors and their families, for whom the land of their ancestors is of particular importance.

Francis is to arrive at 10:00 am (1600 GMT) Monday at the community of Maskwacis, about 100 kilometers (62 miles) south of Edmonton, where the former Ermineskin residential school -- one of the largest in Canada -- was located until its closure in 1975.

After a silent prayer in the cemetery, he will deliver his first speech, in Spanish, to an estimated crowd of 15,000, expected to include former students from across the country.

At 4:30 pm, Francis will go to the Sacred Heart Catholic Church of the First Peoples in Edmonton, one of the city's oldest churches, where he will deliver a second speech to Indigenous communities.

"I hope that this visit is the beginning of a change in history, a change in the way business is going to be done, and a way for us to begin our healing journey," George Arcand Jr, the grand chief of the Confederacy of Treaty Six First Nations, said on national television.

"I asked the Pope to walk with us and create this new road that needs to be created."

Since May 2021, more than 1,300 unmarked graves have been discovered at the sites of the former schools, sending shockwaves throughout Canada.

The country has slowly begun to acknowledge this long, dark chapter in its history.

The papal visit, though highly anticipated, is also a source of controversy for some survivors and their families. Many expect Francis to make symbolic gestures, such as returning some of the Indigenous artifacts that have been held in the Vatican for decades.

"It means a lot to me" that he came, said Deborah Greyeyes, 71, noting her "entire reserve" was going to hear Francis speak.

Greyeyes, an Edmonton resident, is a member of the Muskeg Lake Cree Nation, the largest Indigenous group in Canada.

"I think we have to forgive, too, at some point," she told AFP. But "a lot of stuff was taken away from us."

After a mass before tens of thousands of faithful in Edmonton on Tuesday, Francis will head northwest to an important pilgrimage site, the Lac Sainte Anne.

Following a July 27-29 visit to Quebec City, he will end his trip in Iqaluit, capital of the northern territory of Nunavut and home to the largest Inuit population in Canada.

There he will meet with former residential school students, before returning to Italy.

The flight to Edmonton constituted the longest since 2019 for Francis, who has been suffering from knee pain that has forced him to use a cane or wheelchair in recent outings.

Francis is the second pope to visit Canada, after John Paul II, who did so twice in the 1980s and again in 2002.

General » Be a reporter: Write and send your article » Subscribe for news alert
Tags: pope