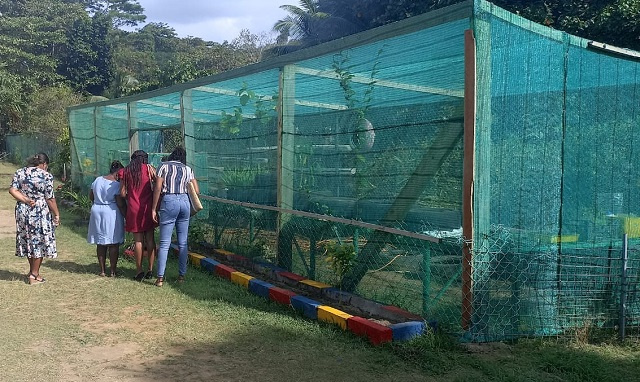 The aim was to learn more about what the school is doing in order to promote environment education. (Sedrick Nicette, Seychelles News Agency)

Two Chevening Alumni scholars are currently on a working visit to Seychelles, to learn from the island nations' best practices in the Blue Economy sector and environmental protection.

The Chevening Alumni are past foreign students with leadership qualities who attended international scholarships in the United Kingdom funded by the British Foreign and Commonwealth Office.

The two scholars, Marie-Stephania Perrine and Audrey Ravina, who are from the island of Rodrigues, have been on a series of meetings and visits with the assistance of the Department of Blue Economy. Through their visits, they will gather information on how Seychelles has educated the population on the importance of the Blue Economy and how school children are being taught the need to preserve the environment.

"We are working on an education programme, which we intend to deliver to primary and secondary schools, as well as the fishermen community on Rodrigues. Given Seychelles' prominence in the Blue Economy, we wanted to learn more about what the country is doing and discover the best practices, so that we can adapt it to Rodrigues," said Perrine, the project leader.

On Tuesday, the two scholars were invited to Anse Etoile's primary school, one of the top schools in environmental programmes. The aim was to learn more about what the school is doing in order to promote environment education.

Perrine said that the visit to the school will help them find ways to get more youths from Rodrigues involved in environment protection so that as they grow older, they will be the ones to promote and make policies for the betterment of the island.

"We have seen that the school is filled with greenery and they have incorporated environment education into the various subjects. That is something we are hoping can be adopted in our country, where there is a lack of education, with regards to environment protection," said Perrine.

The two scholars, who are expected to leave Seychelles on Sunday, will visit Mont Fleuri secondary school, the Marine Conservation Society Seychelles (MCSS) and the Seychelles Conservation and Climate Adaptation Trust (SeyCCAT), among others.

The head of Anse Primary school, Jacqueline Adolphe, said she is proud that her school was chosen as an example.

"We are happy that we have been able to show this delegation what we as a school are doing to encourage the children to protect the environment, which is something that will help them to implement what they have learned from us in their own schools," said Adolphe.

She added that they have also been able to learn from the scholars, especially where it concerns the Blue Economy, which is not something the school is currently involved in.

General » Be a reporter: Write and send your article » Subscribe for news alert
Tags: Chevening Alumni