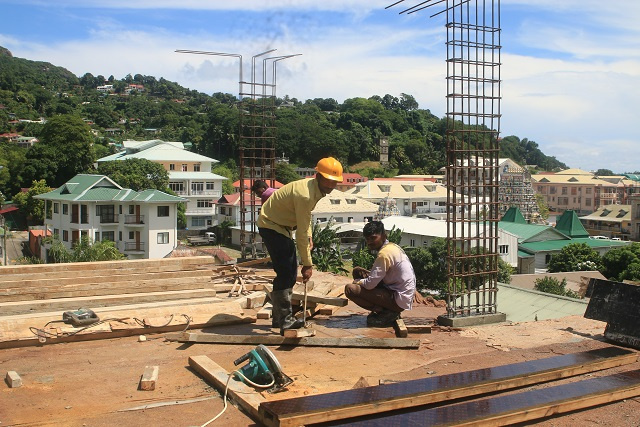 Seychelles has many migrant workers from mainly Asian countries such as India, Bangladesh, Sri Lanka, Pakistan and the Philippines, who mostly work in construction. (Joe Laurence)

(Seychelles News Agency) - The Seychelles’ judiciary is appealing for continued efforts to combat instances of human trafficking in the country, even if it has a very low incidence in the island nation’s jurisdiction.

The judiciary launched the appeal to mark the United Nations World Day against Trafficking in Persons, marked on 30 July.

Seychelles, an archipelago in the western Indian Ocean, is highly dependent on foreign workers, especially in construction, agriculture, and other sector works involving manual labour.

Furthermore, the country, with a population of 99,000 people, has recorded instances of human trafficking and breaching of labour laws take place in foreign employment cases in these sectors.

In a communique, Chief Justice Rony Govinden said that although there are few cases of trafficking in humans, “the Seychelles courts would apply the rule of law fairly and adequately in all human trafficking cases when these values are broken and when human rights are breached in this way”.

Figures from the judiciary show that from 2016 until 2021, eight human trafficking cases were filed with convictions before the Supreme Court – with two cases, which were filed in 2021, currently pending trial.

The most recent being Vincent Samson who was sentenced on July 11, 2022, in an aggravated human trafficking and trafficking in persons case.

The courts found that he was guilty of the first and was sentenced to 15 years’ imprisonment, and 10 years for the second, both of which will run concurrently.

“The sentences handed down by the courts in these cases also validate Seychelles’ willingness to take a strong stance against human trafficking,” said Govinden.

However, Govinden also said that it was up to “the continued coordinated efforts of law enforcement, the criminal justice systems and others in leveraging technology in their responses,” to eradicate human trafficking.

This includes “aiding investigations to shed light on trafficking networks; enhancing prosecutions through digital evidence to alleviate the situation of victims in criminal proceedings; and providing support services to survivors,” he explained.

“With combined efforts of monitoring, reporting, and following due process through the rule of law, Seychelles demonstrates that human rights violations are taken very seriously in the country.”

“Through these constitutional guarantees, the courts mete out sanctions to traffickers to ensure that justice is served in good measure in cases of human trafficking brought before it.”