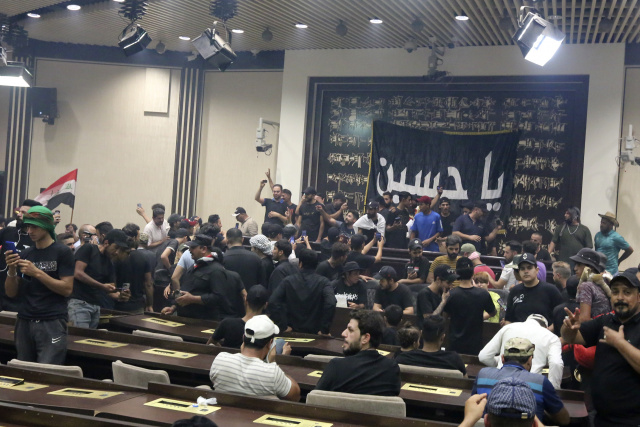 Supporters Iraq's powerful Shiite preacher Moqtada Sadr, protesting against a rival bloc's nomination for prime minister, occupy Iraq's parliament in Baghdad's high-security Green Zone, on July 31, 2022. Banner hanging in the background reads: "Ya Hussein" in reference to Prophet Mohammed's grandson who is reverred by Shiite Muslims. It is the second time in days that supporters of the firebrand Shiite cleric have forced their way into the legislative chamber, after October elections failed to lead to the formation of a government, despite tear gas, water cannon and baking temperatures that touched 47 degrees Celsius (116 degrees Fahrenheit). (Photo by Sabah ARAR / AFP)

(AFP) - Powerful Iraqi Shiite preacher Moqtada Sadr Sunday urged other factions to support a protest that has seen his followers occupy parliament in a dispute over who should name the next prime minister.

Nearly 10 months after elections, the oil-rich country is still without a new government due to the repeated failure of negotiations and the en-masse resignation last month of Sadr's bloc -- the largest in parliament.

Despite tear gas, water cannon and temperatures that touched 47 degrees Celsius (116 degrees Fahrenheit), his followers stormed the legislature on Saturday after pulling down heavy concrete barricades on roads to Baghdad's fortified Green Zone, home to government buildings and embassies.

The health ministry said at least 100 protesters and 25 security personnel were hurt in the confrontation, prompting the European Union to express concern over "escalation".

On Sunday, the protesters -- who had bedded down overnight with blankets -- appeared in no mood to leave, as volunteers distributed soup, hard-boiled eggs, bread and water.

"We were hoping for the best but we got the worst," said one of the protesters, Abdelwahab al-Jaafari, 45, a day labourer with nine children. "The politicians currently in parliament have brought us nothing."

Analysts have said Sadr, a mercurial cleric who once led a militia against US and Iraqi government forces, is using protests to signal that his views must be respected in establishing a new government, amid a power struggle between his bloc and rival Shiite factions.

Sadr on Sunday took to Twitter to laud a "spontaneous revolution in the Green Zone -- a first step," he said, towards "an extraordinary opportunity for a fundamental change."

He called on "everyone... to support the reformist revolutionaries".

That stance earned a rebuke from his principal Shiite political opponents, the pro-Iran Coordination Framework, which described Sadr's comments as "a call for a coup against the people, the state and its institutions".

The immediate trigger for the occupation of parliament was a decision by the Coordination Framework to nominate former cabinet minister Mohammed Shia al-Sudani for the prime minister's post.

The Hashed -- along with tribes and the wider security forces -- were among elements Sadr urged to join his protest initiative on Sunday.

A statement issued by a Sadr loyalist on Sunday urged protesters to keep the premises clean, organise unarmed security patrols and to keep the sit-in going by operating in shifts.

Sadr's bloc emerged from elections in October as the biggest parliamentary faction, but still far short of a majority.

In June, his 73 lawmakers quit in a bid to break the political logjam.

That led to the pro-Iran bloc becoming the largest in parliament, but still there was no agreement on naming a new prime minister, president or cabinet.

Sadr's supporters had already forced their way into the legislative chamber on Wednesday, staying there for two hours before leaving on his orders.

Despite oil wealth and elevated global crude prices, Iraq remains hobbled by corruption, unemployment and other woes, which sparked a youth-led protest movement in 2019.

As a result of past deals, the Sadrists also have representatives at the highest levels of government ministries and have been accused by their opponents of being as corrupt as other political forces.

But supporters of Sadr view him as a champion of the anti-corruption fight.

One of them, Oum Hussein, 42, said the sit-in sought a government of "people with integrity who serve the country", while Sadr's opponents select politicians "known for corruption".

A spokesperson for the European Union expressed concern about "the ongoing protests and their potential escalation", while United Nations Secretary General Antonio Guterres urged "peaceful and inclusive dialogue," according to his spokesman.