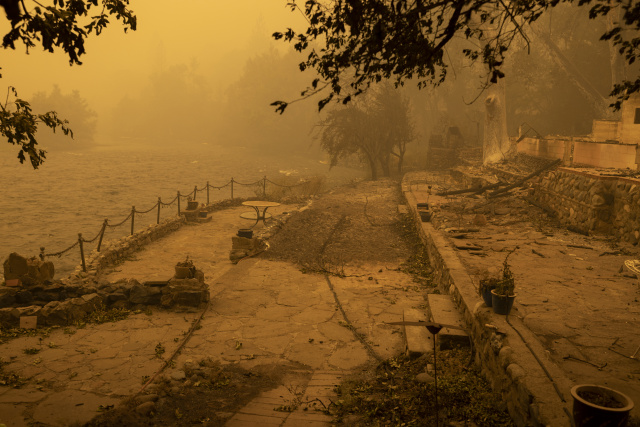 River-front property in the community of Klamath River lies in ruins after it burned in the McKinney Fire in the Klamath National Forest, northwest of Yreka, California, on July 31, 2022. Fueled by drought in a changing climate, the fire grew to over 50,000 acres in less than 48 hours. (Photo by DAVID MCNEW / AFP)

(AFP) - The largest fire in California this year is forcing thousands of people to evacuate as it destroys homes and rips through the state's dry terrain, whipped up on Sunday by strong winds and lightning storms.

The McKinney Fire was zero percent contained as it burned in Klamath National Forest in northern California, CalFire said, spreading more than 51,000 acres near the city of Yreka.

It is the largest wildfire in California so far this year, with the state already battling several blazes this summer.

California Governor Gavin Newsom declared a state of emergency Saturday, saying the fire had "destroyed homes" and "threatened critical infrastructure" after breaking out on Friday.

The fire was "intensified and spread by dry fuels, extreme drought conditions, high temperatures, winds and lightning storms," Newsom said in a statement.

"Surrounding areas should be ready to leave if needed. Please don’t hesitate to evacuate," the Siskiyou County Sheriff tweeted.

Highway 96 and McKinney Creed Road southwest of the Klamath River were closed to the public, CalFire said.

Yreka resident Larry Castle told the Sacramento Bee newspaper that he and his wife had packed up a few possessions and their three dogs to leave the area for the night, as other fires in recent years had taught them the situation could turn "very, very serious."

Nearly 650 people working to douse the blaze as of Sunday, the National Wildfire Coordinating Group said.

Fire fighting forces were sent from nearby Oregon to assist in containment efforts, the Oregon State Fire Marshall said, as the Klamath National Forest also deals with the Kelsey Creek Fire.

The Oak Fire near Yosemite National Park broke out in mid-July and spread rapidly, destroying 41 buildings and forcing thousands to evacuate.

California, which is facing a punishing drought, still has months of fire season ahead of it.

In recent years, California and other parts of the western United States have been ravaged by huge and fast-moving wildfires, driven by a warming climate.