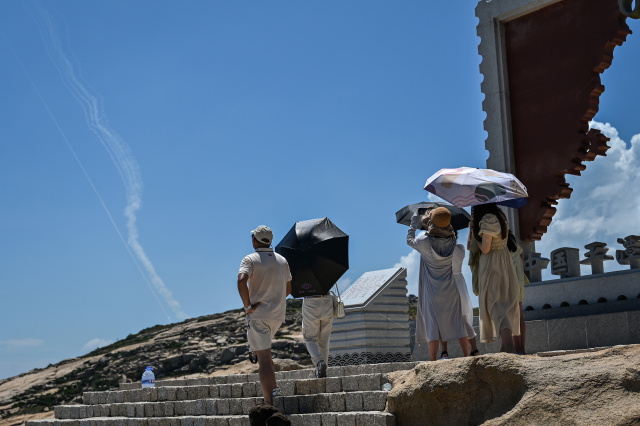 Chinese military helicopters fly past Pingtan island, one of mainland China's closest point from Taiwan, in Fujian province on August 4, 2022, ahead of massive military drills off Taiwan following US House Speaker Nancy Pelosi's visit to the self-ruled island. China is due on August 4 to kick off its largest-ever military exercises encircling Taiwan, in a show of force straddling vital international shipping lanes following a visit to the self-ruled island by US House Speaker Nancy Pelosi.
(Photo by Hector RETAMAL / AFP)

(AFP) - China was set to press ahead Friday with its largest-ever military exercises encircling Taiwan despite firm statements of condemnation by the United States, Japan and the European Union.

Beijing's decision to fire ballistic missiles and deploy fighter jets around Taiwan saw Washington lambast what it said was a gross overreaction to a visit to the self-ruled, democratic island by US House Speaker Nancy Pelosi.

The US House speaker was the highest-profile US official to go to Taiwan in years and defied stark threats from Beijing, which views the self-ruled island as its territory.

In retaliation, China on Thursday launched a series of exercises in multiple zones around Taiwan, straddling some of the busiest shipping lanes in the world and at some points coming just 20 kilometres (12 miles) from the island's shores.

The drills involved a "conventional missile firepower assault" in waters to the east of Taiwan, the Chinese military said. Beijing has said they will continue until midday Sunday.

Beijing's state-run Xinhua news agency reported the Chinese army "flew more than 100 warplanes including fighters and bombers" during the exercises, as well as "over 10 destroyers and frigates."

Taiwan said the Chinese military fired 11 Dongfeng-class ballistic missiles "in several batches", while Japan claimed of the nine missiles it had detected, four were "believed to have flown over Taiwan's main island".

Taiwan has said it would not confirm missile flight paths, however.

"Considering the main goal of CCP's (Chinese Communist Party's) launch of missiles is to intimidate us and in order to protect the military's intelligence, surveillance and reconnaissance capabilities, we will not release information such as its flight," the defence ministry said in a statement.

China has defended the drills as just countermeasures in the face of provocations by the United States and its allies in Taiwan, which China views as its own territory and which it has vowed to retake.

But the drills have triggered outrage in the United States and other democracies.

"China has chosen to overreact and use the speaker's visit as a pretext to increase provocative military activity in and around the Taiwan Strait," John Kirby, a White House spokesman, told reporters.

"The temperature's pretty high," but tensions "can come down very easily by just having the Chinese stop these very aggressive military drills," he added.

Japan has lodged a formal diplomatic complaint against Beijing for the drills, with five of the missiles believed to have landed in its exclusive economic zone.

And Prime Minister Fumio Kishida Friday slammed the drills as a "serious problem that impacts our national security and the safety of our citizens" and called for an "immediate cancellation of the military drills."

While on the final leg of her tour of Asia, Pelosi said in Tokyo Friday that Washington will "not allow" China to isolate Taiwan.

But Chinese Foreign Minister Wang Yi said in Phnom Penh, on the sidelines of a regional summit on Thursday, that the "flagrant provocation" by the United States had set an "egregious precedent."

"If it's not corrected and countered, will the principle of non-interference in internal affairs still exist? Will the international law still be upheld?" he said, according to Xinhua.

The manoeuvers are taking place along some of the busiest shipping routes on the planet, used to supply vital semiconductors and electronic equipment produced in East Asian factory hubs to global markets.

Taiwan's Maritime and Port Bureau has issued warnings to ships to avoid the areas being used for the Chinese drills.

The Taiwanese cabinet has also said the drills would disrupt 18 international routes passing through its flight information region (FIR).

Several international airlines have told AFP they will divert flights from airspace around Taiwan island.

"The shutting down of these transport routes -- even temporarily -- has consequences not only for Taiwan, but also trade flows tied to Japan and South Korea."

But markets in Taipei appeared to shrug off the tensions, with the Taiwan Taiex Shipping and Transportation Index, which tracks major shipping and airline stocks, up 2.3 percent early Friday.

And analysts broadly agree that despite all its aggressive posturing, Beijing does not want an active military conflict against the United States and its allies over Taiwan -- just yet.