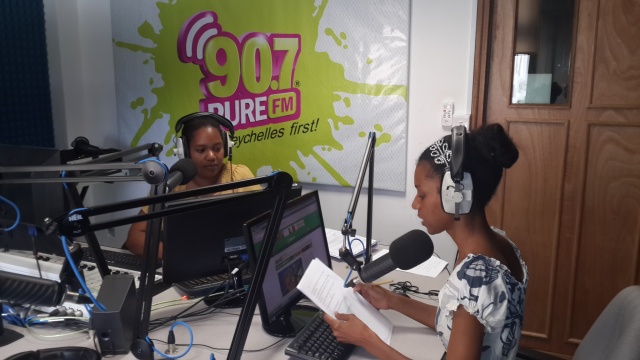 Presenters at Pure FM, Seychelles' first privately-owned radio station. In Seychelles, which has a population of 90,000, with two daily newspapers, 1 tri-weekly and 3 weeklies, 3 radio stations, 1 national television station, there is a safe climate for journalists. Between 2009-2014 no journalists were killed, imprisoned or attacked, and only two newspapers were taken to court for libel, and one for contempt of court. No journalists were fired for their reporting, no media were shut down by the government, no websites were blocked or banned. (Seychelles News Agency)

Written by media consultant Pauline Ferrari, a Seychellois media observer based in Paris, and submitted to the Seychelles Ministry of Foreign Affairs, the report charts the island nation’s progress in the media landscape between 2009-2014.

The report is a follow-up of one she made in 2009 and notes the changes that have taken place between then and 2014 that have occurred in the country in terms of the liberalisation of the media, freedom of access to information, and the efforts made to ensure press freedom on international norms.

Ferrari reports that among the 2009 report recommendations that have been implemented are the creation of the Seychelles Media Commission, to adjudicate on media issues while ensuring more freedom, and the reduction of television and radio licence fees.

The reduced fees saw the opening of ‘Pure FM’ a private radio station, says Ferrari in her report.

The report suggests that Seychelles has all the elements of a society that promotes media pluralism and encourages discourse, noting that new regular publications have been established since the last report.

Asked by an SNA journalist to explain why press freedom organisation Reporters without Borders gave the country a lower ranking each year since 2009 from rank 72 in 2009 to 103 in 2014, Ferrari said that this could be there is still a lack of presentation of different views in the media, and for a better ranking there needs to be more independence of the media from ”political, economic, religious and military centres of power."

“There also needs to be more transparency of the bodies that regulate the media and greater,” she said.

In 2013 the Seychelles government had called on Reporters without Borders to send an assessment mission to Seychelles following the publication of their 2013 report which downgraded Seychelles by 20 places, despite major advances in its media landscape. The organisation did not reply.

Ferrari recommends, among other things, that the Seychelles Media Association be relaunched and that it should work together with the SMC, with efforts being made to boost the flow of information, balancing it in such a way as to protect public and private interests. She also recommended the introduction of a Freedom of Information Act.

Ferrari notes that on September 23, 2013 the Seychelles Media Commission held its first editorial meeting to evaluate the situation in the country.

“Delegates at the meeting said it was fruitful and concerns included difficulty of access to information from government departments,” says the report.

“In a press release dated February 14, 2014, the SMC declared there even a degree of tolerance toward newspapers affiliated to political parties. Should public officials choose to take action against the press for defamation, there would be a suit brought against the press at least every week.”

People earlier mistrusted the commission thinking it would be biased because it is headed by the former chief executive of the state broadcaster, the Seychelles Broadcasting Corporation Ibrahim Afif, but the report says this perception has dwindled.

There is no unity among media workers -- most of whom are not trained journalists -- so the profession suffers, says the report. Ferarri suggests sections of the political media carry racist remarks and showed intolerance against foreigners. 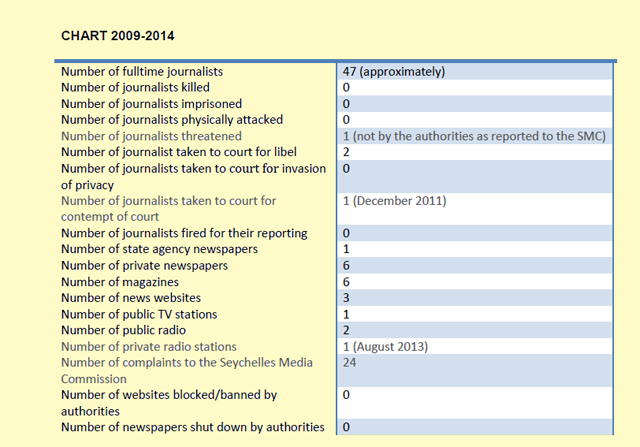 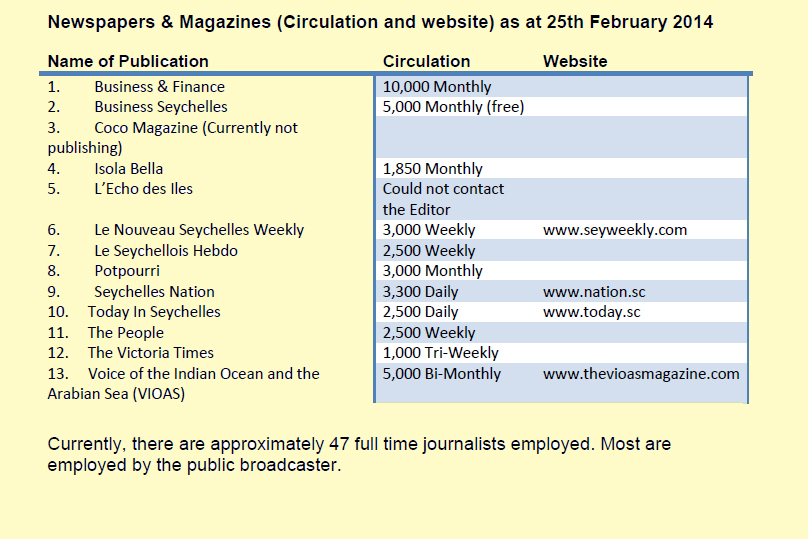