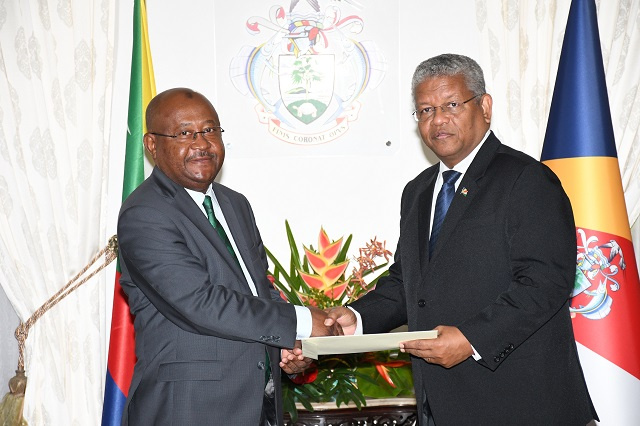 The message was delivered by Hamada Madi (left), a special envoy from Comoros.

The need for small island states to join together to defend their interests at the upcoming United Nations Climate Change Conference (COP27) in Egypt was a message sent by Comoran President Azali Assoumani to his Seychelles counterpart, Wavel Ramkalawan on Tuesday.

The message was delivered by Hamada Madi, a special envoy from Comoros.

Madi told reporters that Comoros and Seychelles are archipelagos in the Indian Ocean and part of the same organisations like the African Union, the Francophonie and the Indian Ocean Commission.

He said that the general message was "especially to prepare together with all the islands for the next COP summit in Egypt so that the islands have a common position and the defense of our interests."

Madi said it is obvious "that when we are in the big conferences, we have the impression that we, the small island states, are forgotten. So, the president is calling on his brothers from the islands to prepare for this meeting."

The special envoy from Comoros also brought a message of continued relations and friendship between the two countries.

Seychelles, an archipelago in the western Indian ocean, established diplomatic relations with the Comoros June 30 in 1988.

The 27th session of the Conference of the Parties (COP27) will take place in Sharm El-Sheikh, Egypt from November 7-18, 2022 after the COP26 took place last year after being postponed in 2020 because of the COVID-19 pandemic.

In an interview with the press, Joubert expressed his disappointment with the outcome of the conference.

"We are quite disappointed because the ambitions that were communicated at the very beginning were not carried through to the end," he said.

In 2009 and again in 2015, developed countries promised to mobilise $100 billion by 2020 and through 2025 to help developing nations respond to climate change and reduce emissions, for example, by investing in renewable energy or flood defences.

Joubert said that the progress made in the last years should have been much more and that there should be more commitment, especially from the big emitters.