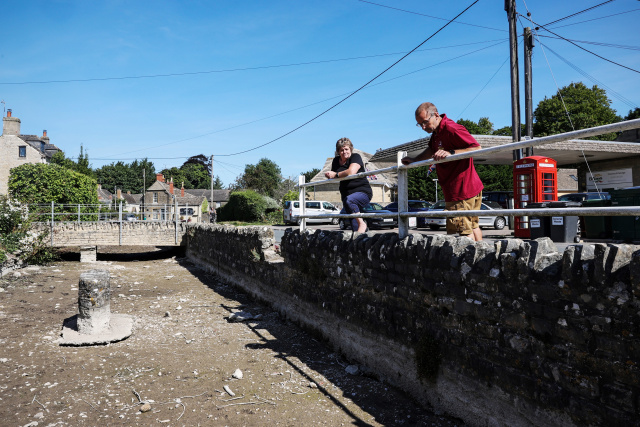 Carol Hill (rear C) stops to look at the dried river bed of the Infant River Thames, in Ashton Keynes, on August 8, 2022. The source of the Thames has dried up and has shifted more than 5 miles downstream from Thames Head near Cirencester in Gloucestershire. Swathes of southern and eastern England recorded the lowest rainfall in July 2022 on record, the UK's Met Office. The whole of England recorded an average of 23.1 mm of rain -- the lowest figure for the month since 1935 and the seventh lowest July total on record, it said. (Photo by ADRIAN DENNIS / AFP)

(AFP) - At the end of a dusty track in southwest England where the River Thames usually first emerges from the ground, there is currently scant sign of any moisture at all.

The driest start to a year in decades has shifted the source of this emblematic English river several miles downstream, leaving scorched earth and the occasional puddle where water once flowed.

It is a striking illustration of the parched conditions afflicting swathes of England, which have prompted a growing number of regional water restrictions and fears that an official drought will soon be declared.

"We haven't found the Thames yet," confided Michael Sanders, 62, on holiday with his wife in the area known as the official source of the river.

The couple were planning to walk some of the Thames Path that stretches along its entire winding course -- once they can find the waterway's new starting point.

"It's completely dried up," the IT worker from northern England told AFP in the village of Ashton Keynes, a few miles from the source, noting it had been replaced by "the odd puddle, the odd muddy bit".

"So hopefully downstream we'll find the Thames, but at the moment it's gone."

The river begins from a underground spring in this picturesque region at the foot of the Cotswolds hills, not far from Wales, before meandering for 215 miles (350 kilometres) to the North Sea.

Along the way it helps supply freshwater to millions of homes, including those in the British capital London.

Following months of minimal rainfall, including the driest July in England since the 1930s, the country's famously lush countryside has gone from shades of green to yellow.

"It was like walking across the savannah in Africa, because it's so arid and so dry," exclaimed David Gibbons.

The 60-year-old retiree has been walking the length of the Thames Path in the opposite direction from Sanders -- from estuary to source -- with his wife and friends.

As the group reached their final destination, in a rural area of narrow country roads dotted with stone-built houses, Gibbons recounted the range of wildlife they had encountered on their journey.

The Thames, which becomes a navigable strategic and industrial artery as it passes through London and its immediate surroundings, is typically far more idyllic upstream and a haven for birdwatching and boating.

However, as they neared the source, things changed.

"In this last two or three days, (there's been) no wildlife, because there's no water," Gibbons said.

"I think water stopped probably 10 miles away from here; there's one or two puddles," he added from picturesque Ashton Keynes.

Andrew Jack, a 47-year-old local government worker who lives about nine miles (15 kilometres) from the village, said locals had "never seen it as dry and as empty as this".

The river usually run alongside its main street, which boasts pretty houses with flower-filled gardens and several small stone footbridges over the water.

But the riverbed there is currently parched and cracked, the only visible wildlife some wasps hovering over it, recalling images of some southern African rivers during the sub-continent's dry season.

There will be no imminent respite for England's thirsty landscape.

The country's meteorological office on Tuesday issued an amber heat warning for much of southern England and eastern Wales between Thursday and Sunday, with temperatures set to reach the mid-30s degrees Celsius.

Climate scientists overwhelmingly agree that carbon emissions from humans burning fossil fuels are heating the planet, raising the risk and severity of droughts, heatwaves, and other such extreme weather events.

Local authorities are reiterating calls to save water, and Thames Water, which supplies 15 million people in London and elsewhere, is the latest provider to announce forthcoming restrictions.

But Gibbons was remaining sanguine.

"Having lived in England all my life, we've had droughts before," he insisted.

"I think that it will go green again by the autumn."

Jack was more pessimistic as he walked with his family along the dried-up riverbed, where a wooden measuring stick gauges non-existent water levels.

"I think there are lots of English people who think 'great, let's have some European weather'", he said.

"But we actually shouldn't, and it means that something's changed and something has gone wrong.

"I'm concerned that it's only going to get worse and that the UK is going to have to adapt to hotter weather as we have more and more summers like this."