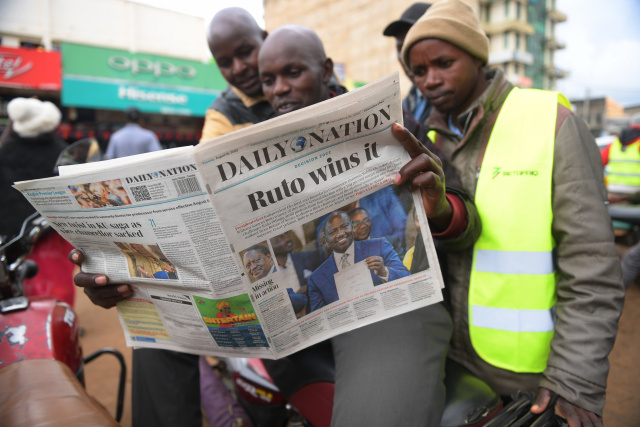 Motorcycle riders read the Daily Nation, a local daily newspaper, with a headline reporting the election of Kenya's 5th President elect William Ruto, in Eldoret on August 16, 2022. Kenyans were on August 16, 2022 braced for a potential period of uncertainty after William Ruto was proclaimed winner of the hard-fought presidential election but his opponents cried foul.
All eyes were on defeated rival Raila Odinga, who failed at his fifth stab at the presidency but has yet to make any public comments about the outcome of the August 9 election. (Photo by Simon MAINA / AFP)

Motorcycle riders read the Daily Nation, a local daily newspaper, with a headline reporting the election of Kenya's 5th President elect William Ruto, in Eldoret on August 16, 2022. Kenyans were on August 16, 2022 braced for a potential period of uncertainty after William Ruto was proclaimed winner of the hard-fought presidential election but his opponents cried foul.All eyes were on defeated rival Raila Odinga, who failed at his fifth stab at the presidency but has yet to make any public comments about the outcome of the August 9 election. (Photo by Simon MAINA / AFP)

(AFP) - Kenya's defeated presidential candidate Raila Odinga vowed Tuesday to pursue "all constitutional and legal options" after rejecting the outcome of elections that awarded victory to his rival William Ruto.

The 77-year-old veteran politician branded the result of the August 9 race a "travesty" but stopped short of explicitly announcing that he would mount a challenge at the Supreme Court.

"What we saw yesterday (Monday) was a travesty and a blatant disregard of the constitution and the laws of Kenya," he told a press conference in Nairobi, blaming the head of the Independent Electoral and Boundaries Commission (IEBC) which oversaw the poll.

"I do not want to fully address our strategies going forward but... we will be pursuing all constitutional and legal options available to us."

Odinga narrowly lost his fifth bid for the top job to Deputy President Ruto, 55, who was proclaimed president-elect Monday after a nail-biting wait for results.

His supporters cried foul over the outcome, which also triggered divisions in the IEBC.

Odinga lost by around 230,000 votes despite the support of his old foe, the outgoing President Uhuru Kenyatta, and the weight of the ruling party machinery behind him.

He has previously said he was cheated of victory in the 2007, 2013 and 2017 elections, and the poll's aftermath is being keenly watched as a test of democratic maturity in the East African powerhouse.

No presidential poll outcome has gone uncontested in Kenya since 2002, and the disputes have led to bloodshed in the past.

In August 2017, the Supreme Court annulled the election after Odinga rejected Kenyatta's victory. Dozens of people were killed by police in post-poll protests.

Kenya's worst electoral violence occurred after the 2007 vote, when more than 1,100 people died in bloodletting between rival tribes.

In the campaign trail, both frontrunners pledged to resolve any disputes in court rather than on the streets.

Violent protests nevertheless erupted in Odinga's strongholds in two Nairobi slums and the lakeside city of Kisumu on Monday evening, although the situation was calm Tuesday.

While many businesses in Kisumu kept their doors shut on Tuesday, waiting for tensions to blow over, Odinga commended his supporters "for remaining calm and keeping the peace".

"Let no-one take the law into their own hands," he said.

Abel Tom, a 48-year-old businessman and pastor, said Odinga's speech would cool the temperature in Kisumu.

"Raila's word is law in these regions. If he speaks anything, it has a serious effect," he told AFP.

"Raila has brought calm at the right time, it comes as a balm to heal the nation."

Some Kenyans, who are already battling a cost-of-living crisis, told AFP they were weary of the constant political bickering.

"I don't think we need to protest. We need to fend for our families. Protests are expensive. It can even cost you your life," said Bernard Isedia, a 32-year-old taxi driver and father of two who voted for Odinga.

"Life has to return to normal," he told AFP.

Ruto, who was banished to the sidelines after Kenyatta's pact with Odinga despite being his deputy since 2013, was conciliatory in his victory speech Monday.

"I will work with all leaders in Kenya so that we can fashion a country that leaves nobody behind," Ruto said.

"There is no room for vengeance."

The race remained unpredictable to the end, with Ruto scoring 50.49 percent of the vote compared to 48.85 percent for Odinga, IEBC chairman Wafula Chebukati said.

But in an extraordinary move shortly before the announcement, four of the IEBC's seven commissioners disowned the results.

Vice chair Juliana Cherera told a press conference Tuesday that the aggregated percentages of the votes for the four presidential candidates was 100.01 percent -- a "mathematical absurdity".

Analysts however said the discrepancy could be explained by rounding up the percentages.

The IEBC had come under intense pressure to produce a transparent vote after facing stinging criticism over its handling of the annulled 2017 election.

Chebukati, who was IEBC boss in 2017, insisted he had carried out his duties according to the law of the land despite "intimidation and harassment".

Any challenge must be made by Monday to the Supreme Court, which then has 14 days to issue a ruling. If it orders an annulment, a new vote must be held within 60 days.

If there is no court petition, Ruto will take the oath of office in two weeks' time, becoming Kenya's fifth president since independence.

But he will inherit a country burdened with soaring prices, a crippling drought that has left millions hungry, endemic corruption and disenchantment with the political elite.

Africa » Be a reporter: Write and send your article » Subscribe for news alert
Tags: Kenya, Odinga