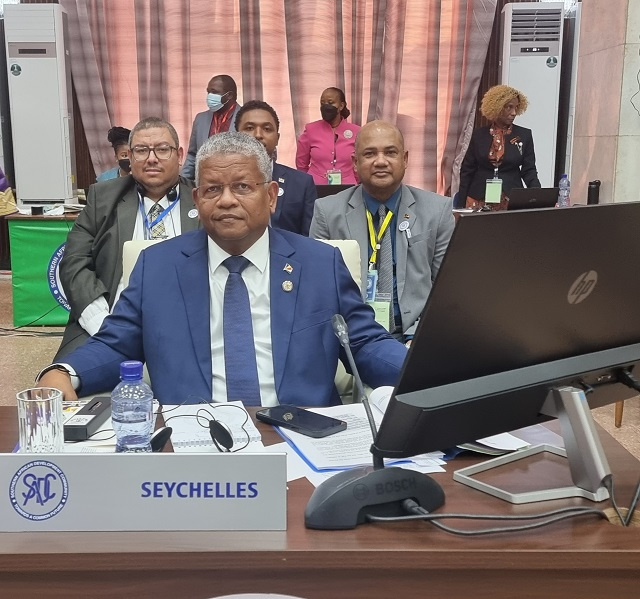 Ramkalwan made an intervention on key decisions taken at the Southern African Development Community (SADC) Summit for heads of state and government. (State House)

(Seychelles News Agency) - Maritime security continues to be a threat to the safety of Seychelles and is becoming one of the most significant issues for the whole African continent, President Wavel Ramkalawan said on Wednesday.

Ramkalwan was making an intervention on key decisions taken at the Southern African Development Community (SADC) Summit for heads of state and government held in the Democratic Republic of Congo.

On Decision 2 - Political and Security in the Region, Ramkalawan said that while the threat of piracy off the coast of Somalia has abated "we are seriously concerned by the emerging maritime threats in our region."

He said that the western part of the Indian Ocean is a highway for the transshipment of illegal narcotics, human and weapons trafficking.

"Our maritime resources are being poached through illegal, unreported and unregulated fishing, and our oceans are being polluted by the illegal dumping, contributing to the acidification of our oceans and putting our livelihoods at grave risk. Let us also be reminded that all indications are that funding for the insurgency in our region is obtained from illegal and illicit activities, such as drug and weapons trafficking occurring on the high seas," added Ramkalawan.

The President of Seychelles, an archipelago in the western Indian Ocean, outlined a set of recommendations that were adopted as one of the key final decisions of the summit in steering the course for the SADC Maritime Security Strategy.

"Transformation of the Forum to a SADC Parliament will undeniably bring us closer to the achievement of the SADC milestones and assist us in implementing the long-term social and economic policies under the Regional Indicative Strategic Development Plan," said Ramkalawan.

He added that this step forward is in line with the developments taking place in major and mature regional economic communities around the world which are all buttressed by the work of their respective regional parliaments.

After deliberations, the heads of states adopted the annotated agenda and final communique for the 42nd SADC summit as well as signed the various new legal resolutions and amendments to the SADC treaty.

The summit also approved for the 43rd SADC Summit to be held in Luanda, Angola in 2023.