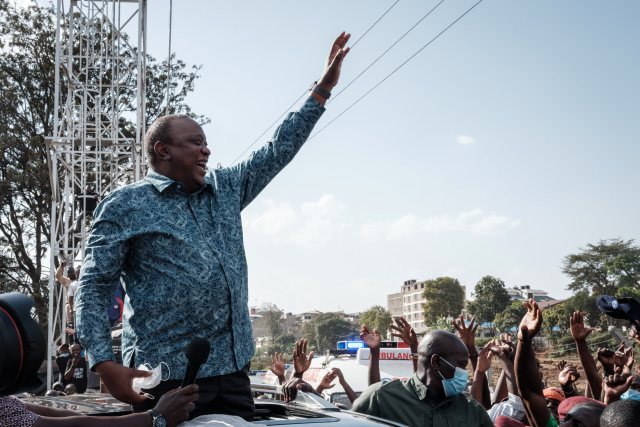 (FILES) In this file photo taken on September 29, 2021 Kenya's President Uhuru Kenyatta (C) waves to people after attending an inauguration of Kibra Level 3 hospital in Kibera slum in Nairobi. After nearly 10 years in power and a mixed legacy, Uhuru Kenyatta remains an enigma to many Kenyans, even those who twice elected him president.
But one thing is certain: it is impossible to disassociate the outgoing leader from his family, which ranks among Kenya's richest, with two of Kenya's four presidents emerging from the Kenyatta dynasty.
His endorsement of longtime arch-rival Raila Odinga sparked rumours that the departing president is eager to maintain a strong presence in Kenyan politics, effectively playing the role of kingmaker by helping the veteran opposition leader secure the backing of his ruling Jubilee party.
True to form, Kenyatta's motives or future plans remain unclear but many believe he will build on the diplomatic legacy crafted since his re-election in 2017. (Photo by Yasuyoshi CHIBA / AFP)

(AFP) - Kenya's outgoing President Uhuru Kenyatta pledged Thursday that there would be a smooth transition of power after a hotly disputed election whose outcome could be challenged in court.

Kenyatta had backed his erstwhile foe Raila Odinga in the August 9 poll after falling out with his deputy William Ruto, who won the presidential race by a narrow margin.

The outgoing leader has yet to publicly congratulate Ruto, who has served as deputy president since 2013 and was long considered Kenyatta's heir-apparent.

At a meeting with Kenyan religious leaders on Thursday, Kenyatta "assured them that the process of transition will be smooth", his office said in a statement.

He delivered a similar message to visiting US congressional leaders.

"Kenya will remain steadfast in entrenching the principles of good governance to ensure the country upholds its position of a shining example of democracy in the continent by maintaining peace during this transition period," his office said on Twitter.

Ruto had been counting on Kenyatta's support for the top job, but in an extraordinary turn of events the president reached a pact with veteran opposition leader Odinga in 2018 that left him sidelined.

On the campaign trail, Kenyatta -- who has served two terms as head of state and could not run again -- had described Ruto as "untrustworthy".

Odinga, who at 77 was making his fifth bid for the presidency, has vowed to pursue all "constitutional and legal" avenues against a result he considers "null and void".

The outcome has also caused a schism within the Independent Electoral and Boundaries Commission (IEBC).

Four its seven commissioners have disowned the results and accused the body's head of acting outside the constitution.

Any challenge to the results must be lodged by Monday afternoon with the Supreme Court which then has 14 days to issue a ruling. If it orders an annulment, a new vote must be held within 60 days.