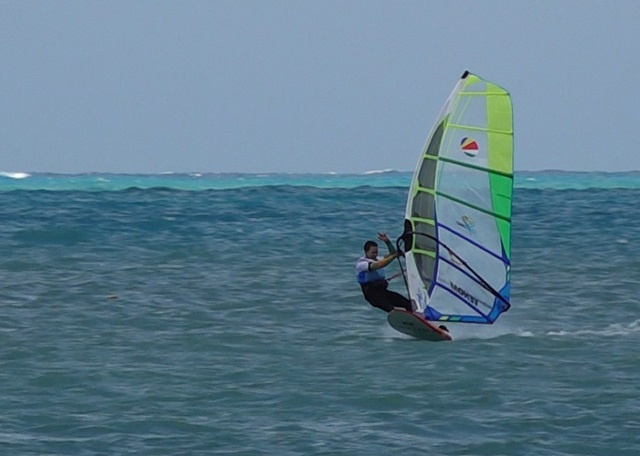 The winner, Jean-Marc Gardette, said it was tough race, especially with the wind not being strong all the way between Mahe and Praslin. (Sedrick Nicette)

(Seychelles News Agency) - The record for the fastest time to reach Seychelles’ second largest island, Praslin, from the main island of Mahe remains intact, after the latest Mahe-Praslin windsurfing race on Saturday.

Seychelles’ top windsurfer, Jean-Marc Gardette, won the 44km race in one hour, 5 minutes and 19 seconds, which was some way off the record time of 57 minutes and 51.62 seconds, set by Stephen Stravens in 2002.

“It was tough race, especially with the wind not being strong all the way, while visibility was also very poor, so there were moments where I lost speed because of the lack of wind, but I am happy to have finished in first place,” said Gardette.

He added if the wind had been constant throughout the whole race, then, it is possible he could have broken the record.

The race began just of the coast of Mahe, near the island of Sainte Anne and ended at Grand Anse Praslin, where a large crowd gathered to wait for the surfers who had decided to take up the challenge.

While, Gardette won the race, a young participant really stole the show.

At only 13 years old, Jules Kandasamy, stunned everyone by ending the race in third place, showing that that Seychelles does indeed have promising young talent in the sport.

“I am very happy with my performance today, although I fell behind Gardette early, but I kept pushing and near the end I caught up with Languilla and finished third, just behind him,” said Kandasamy.

Jacquelin Languilla finished his race in second place, where he was clearly in pain after such a tough race.

Meanwhile, the kite surfing race was dominated by the two Mauritian competitors, who in fact finished in fourth and fifth position overall, in the race.

Allan Ricaud, was the one who finished first among the kite surfers with one hour, 10 minutes and 30 seconds, also commented that the wind was a bit of a problem.

“At the start, the wind was strong but as we went on, it started to slow down and that gave us some problems,” said Ricaud.

“I think that the organization and everything has been really good and we hope to come again next year and maybe bring along more people,” Ricaud added.

Mikael Leopold, who finished second in kite-surfing, said it was a tough race, although he did not expect it to be so long.

“In Mauritius, the wind is more regular compared to here, while also thee waves are higher here, which is tough on the legs, but it is a great race and we are very happy to have completed it,” said Leopold.

There was a total of 23 wind and kite surfers who competed in Saturday’s crossing, where for the first time, they were all fitted with GPS trackers to ensure the location was always known to the organisers.

After the Mahe-Praslin event, the surfers are will compete in the four-day Airtel Slalom Cup, which will end on Friday and be followed by the prize-giving ceremony on Saturday.