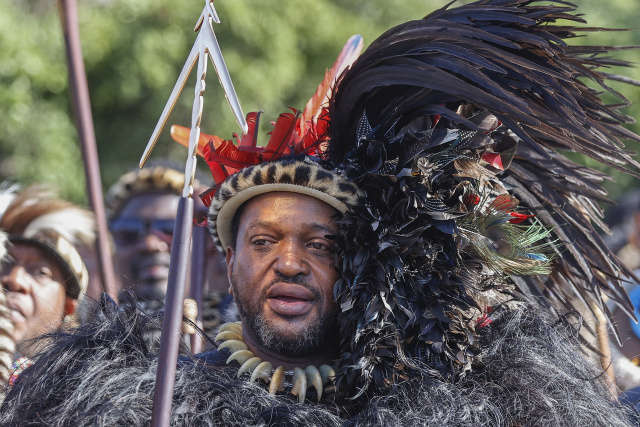 King of Amazulu nation Misuzulu kaZwelithini (C) holds a spear as he sings with Amabutho (Zulu regiments) during his coronation at the KwaKhangelamankengane Royal Palace in Kwa-Nongoma 300km north of Durban on August 20, 2022. Thousands of people gathered at the Zulu royal palace in South Africa on August 20, 2022, for the coronation of the new king in the country's richest and most influential traditional monarchy. Misuzulu Zulu, 47, is set to succeed his father, Goodwill Zwelithini, who died in March last year after 50 years in charge but a bitter succession dispute threatens to overshadow the ceremony.
(Photo by Phill Magakoe / AFP)

(AFP) - Thousands of people gathered at the Zulu royal palace in South Africa Saturday to witness the crowning of a new king in the country's richest and most influential traditional monarchy.

Misuzulu Zulu, 47, ascended to the throne once held by his late father, Goodwill Zwelithini, during traditional ceremonies that were partially overshadowed by a bitter succession dispute.

"Today the Zulu nation starts a new chapter," the new sovereign told well-wishers speaking from a podium in a large white marquee, wearing a traditional leopard skin and a necklace of predator claws.

"I promise I will work to unite the Zulu nation."

Although the title of king does not bestow executive power, the monarchs wield great moral influence over more than 11 million Zulus, who make up nearly a fifth of South Africa's population.

From early morning, men and women in colourful traditional outfits started to assemble outside the marble palace on the hills of Nongoma -- a small town in the southeastern province of KwaZulu-Natal, the Zulu heartland -- to honour the new monarch.

"It's a great day, we are making history," Bongani Khumalo, 80, who is part of the regiments of warriors in charge of protecting the king, told AFP.

Amid the festivities, however, an acrimonious family dispute over the throne raged.

As celebrations got underway, an eleventh-hour legal appeal from a branch of the royal family to block all ceremonies was struck down by a court, local media reported.

In Nongoma, lines of Zulu warriors, known as amaButhos and holding spears and shields of animal skin, marched into the palace grounds.

For hours they enacted war dances under the warm winter sun waiting for the king to appear.

In keeping with tradition, he had killed a lion a few days before the ceremony.

Then on Friday night, Misuzulu had entered the palace's "cattle kraal" where he took part in a secret rite designed to present the new monarch to his ancestors.

During the day, women -- some bare-chested, others in pleated skirts and beaded belts or draped with fabrics bearing the effigy of the sovereign -- sang and danced.

Royal minstrels sang the praises of the new king and told the story of his legendary ancestors.

Suddenly, the king emerged before the crowd wearing a costume of black feathers cinched at the waist by a belt, a spear and holding a shield.

He joined a line of warriors who swore loyalty to their new leader.

"We have our king!" shouted Sinenhlanhla Msweli, a 29-year-old in attendance.

Zulu kings are descendants of King Shaka, the 19th-century leader still revered for having united a large swathe of the country as the Zulu nation, which fought bloody battles against the British colonisers.

The new monarch's first name means "strengthening the Zulus" but his path to the crown has not been smooth.

King Zwelithini who died in March last year after 50 years in charge, left six wives and at least 28 children.

Misuzulu is the first son of Zwelithini's third wife, who he designated as regent in his will.

But the queen died suddenly a month later, leaving a will naming Misuzulu as the next king -- a development that did not go down well with other branches of the family.

Some of the late king's brothers have put forward a third prince as their candidate for the throne.

Queen Sibongile's legal bid to challenge the succession was revived Friday as she was granted the right to appeal a previous unfavourable ruling.

But on Saturday a Pietermaritzburg court struck down an urgent motion by two of her daughters to stop all rituals.

"Those who are Zulu and know the traditions, know who is the king," said Themba Fakazi, an adviser to the previous ruler who supports Misuzulu.

The next Zulu monarch will inherit a fortune and tap into a rich seam of income.

Zwelithini received some 71 million rand ($4.2 million) a year from the government and owned several palaces and other properties.

A royal trust manages almost three million hectares (7.4 million acres) of land -- an area about the size of Belgium.

President Cyril Ramaphosa, who in March recognised Misuzulu as the rightful king, is to formally certify the crowning at a ceremony in the coming months.

The new king has two wives and four children.