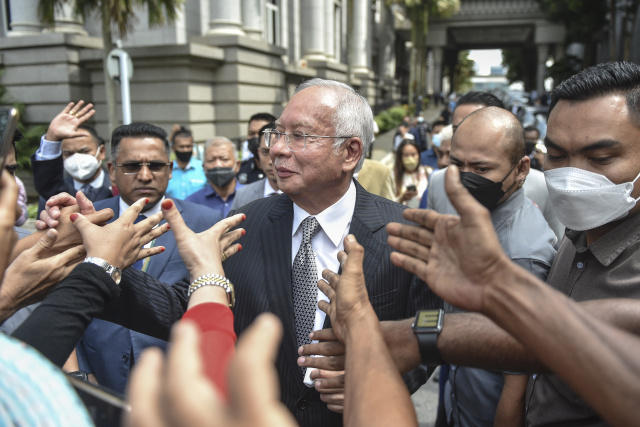 Malaysia's former prime minister Najib Razak (C) greets supporters as he walks out during a break in the trial during an appeal against his corruption conviction over the 1MDB financial scandal, at the federal court in Putrajaya, on August 23, 2022. (Photo by Arif Kartono / AFP)

The 69-year-old former prime minister looked somber and dejected, surrounded by his wife Rosmah and two children as the verdict was read.

"We find the appeal devoid of any merits. We find the conviction and sentence to be safe," Maimun said on behalf of a five-judge panel of the Federal Court.

"It is our unanimous view that the evidence led during the trial points overwhelmingly to guilt on all seven charges."

Maimun said "it would have been a travesty of justice of the highest order if any reasonable tribunal, faced with such evidence staring it in the face, were to find that the appellant is not guilty of the seven charges preferred against him".

Sankara Nair, a lawyer who is not involved in the case, told AFP that "with the court issuing a warrant of committal, Najib will be sent to prison immediately".

The Federal Court decision was handed down after the tribunal threw out a last-minute move by Najib's lawyers to recuse the chief justice from hearing the case, alleging bias on her part.

Najib is the UK-educated son of one of Malaysia's founding fathers who had been groomed for the prime minister's post from a young age.

The final ruling on the jail sentence also came four years after his long-ruling party's shock election defeat in 2018, during which allegations he and his friends embezzled billions of dollars from state fund 1MDB were key campaign issues.

A lower court in July 2020 found Najib guilty of abuse of power, money laundering and criminal breach of trust over the transfer of 42 million ringgit ($10.1 million) from SRC International, a former unit of state fund 1MDB, to his personal bank account.

An appellate court in December denied his appeal, prompting him to go to the Federal Court for a final recourse.

Some analysts said the decision will likely derail any plans by Najib for a political comeback.

"If Najib is found guilty, he will be barred from standing in the next election. Obviously, his political career is gone," James Chin, a professor of Asian studies at the University of Tasmania, told AFP before the verdict was announced.

"Under Malaysian law, Najib cannot stand for this election and the next election," he said, referring to speculation that polls may be held this year.

Elections are not due until September next year.

Najib and his ruling party were voted out in 2018 following allegations of their involvement in a multibillion-dollar financial scandal at 1MDB.

He and his associates were accused of stealing billions of dollars from the country's investment vehicle and spending it on everything from high-end real estate to pricey art.

Despite the lower court sentence, he had not been sent to prison while the appeals process played out.

General » Be a reporter: Write and send your article » Subscribe for news alert
Tags: Malaysia, corruption