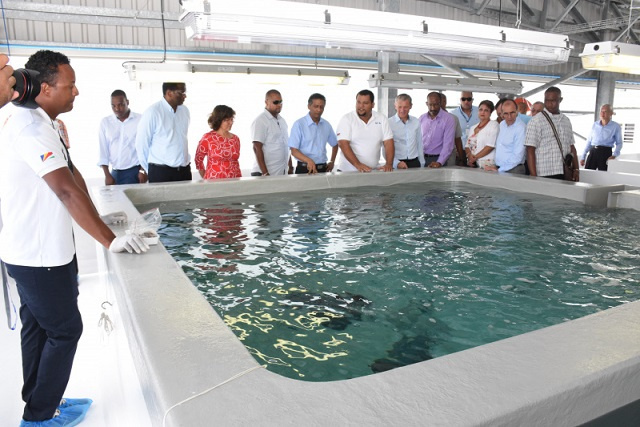 (Seychelles News Agency) - Authorities in Seychelles are working to revamp the national aquaculture policy by the end of this year and review regulations early next year.

The head of the aquaculture department at the Seychelles Fishing Authority (SFA), Aubrey Lesperance, made the announcement in an interview with the press following the opening ceremony of a workshop to review the previous policy.

Government officials, together with participants from the private sector and potential investors in the aquaculture sector, gathered at the meeting held at the Savoy Resort and Spa on Tuesday.

The Western Indian Ocean island state is in the fifth year of using its current policy and SFA chief executive Nichol Elizabeth said that it was time for all those concerned “to meet and analyse the current policy as we plan to extend it for another five years” and improve it for the future.

Seychelles began looking into aquaculture over a decade ago in a bid to diversify its economy in a sustainable manner within the concept of the Blue Economy.

The authorities established its mariculture master plan as well as set up its regulations in order to kick-start the sector and in September last year that the sector officially opened for investment.

“Aquaculture is one the most significant sectors in Seychelles going forward as we have limited other options in terms of tourism and other big industries,” said Lesperance.

So far, SFA revealed that investors from various parts of the world such as Israel, the United States, the Middle East and Europe have shown interest in the sector.

In the years following the establishment of the first policy, there have been many changes in the country – including the onset of the Covid-19 pandemic – that had not been factored in.

“After the first review of the policy we have seen that it is a good one. It's just that so many things have happened since we drafted it in 2018,” said Lesperance.

“There are many things that have changed in the country, the dynamics have changed, the tourism sector has been affected in a way that we have never thought possible,” he continued.

Lesperance also revealed that the introduction of new technologies will also open up other avenues in the sector that they had not thought of initially, such as seaweed farming.

“We had not included that in the initial policy when we started in 2010-2015 the species that we popular in the world were considered exotic here. Now we see the technologies available making it possible to farm seaweeds and extract elements from them,” he explained.

Seaweed is now an ingredient that is being used in cosmetics and other products.

The participants will also have the chance to discuss challenges currently faced in aquaculture such as “the lack of accommodation and other activities on the coastline”.

“Aquaculture is an activity that must be carried out on the coast and it has its specificity where it needs high water quality to develop, otherwise it costs investors more when they have to filter the water they have,” said Lesperance.

“We have had complaints from investors where they have mentioned that this is difficult,” he added.

SFA also explained that it has been working over the last few years to build a cluster of land for investors and that has been really difficult as land is a limited resource in Seychelles.

According to SFA, accessing finance is also another challenge for those joining the industry are facing as local banks do not have packages for investors as the industry is relatively new and banks are taking into account a series of factors such as risks.

So far, the Development Bank of Seychelles (DBS) is working with the department in order to provide the much-needed financing.

To venture into aquaculture, investors may not target exotic species, otherwise they are free to tap in what is available while they are at the same time guided by SFA.