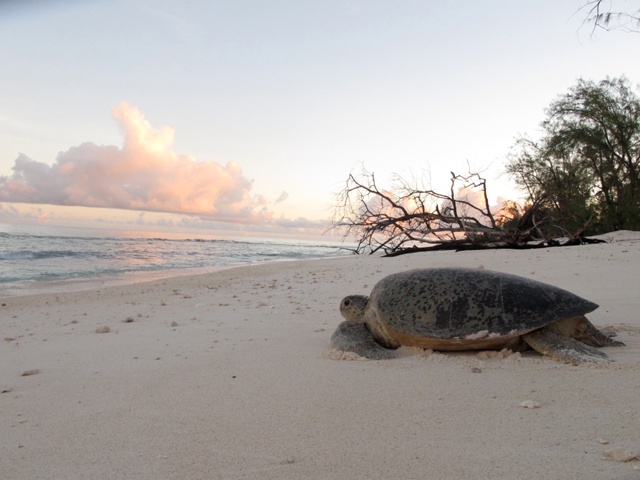 (Seychelles News Agency) - The four raised coralline islands of the Aldabra atoll, situated over a thousand kilometres west of the main island of the Seychelles archipelago, Mahé, may be uninhabited by humans but it is perhaps home to the largest proportion of the country’s wildlife.

The far-flung group of islands, accessible only by boat, is densely populated by Aldabra giant tortoises – over 150 000 of them (greater than the Seychelles population of around 90,000 people) – and a wide variety of birdlife, marine life and exotic species that call the islands their home.

These unusual features have just earned the atoll international recognition, as the Seychelles Islands Foundation (SIF) recently announced that Aldabra will be part of the newly launched Indian Ocean – South-East Asian (IOSEA) Network of Sites of Importance for Marine Turtles.

The setting up of a network of sites of importance for marine turtles in the Indian Ocean – South-East Asia region was agreed upon by the signatory states to the Memorandum of Understanding on the Conservation and Management of Marine Turtles and their Habitats of the IOSEA.

The IOSEA Memorandum of Understanding is an agreement concluded under the Convention on Migratory Species (CMS) Secretariat and is administered by the United Nations Environment Programme (UNEP).

Seychelles, which is among the 45 countries of the Indian Ocean and South East Asia region, became a signatory to the MoU in January 2003.

SIF was established in 1979 as a public trust to manage and protect the UNESCO World Heritage site, and the organization believes such recognition will offer long term conservation benefits that are more easily achieved through coordinated networks such as this.

“This IOSEA network will optimize the use of limited resources and will help to diffuse adverse socio-economic impacts over a wider geographic scale, while promoting ecological connectivity as well as resistance and resilience to environmental stress,” said SIF in its newsletter for the month of October.

“Aldabra was accepted into the network as it met the stringent evaluation criteria, as assessed by the IOSEA Advisory Committee and as endorsed by the collective IOSEA membership, as a critical site needed to secure the future of marine turtle species.”

Green turtles are listed by the International Union for Conservation of Nature (IUCN) as globally endangered due to severe declines in their numbers as a result of hunting, fishing by-catch and coastal habitat modification.

Prior to Aldabra being established as a nature reserve in 1968, green turtles also suffered intensive exploitation for their meat on the atoll.

According to SIF, following several decades of protection under the auspices of the foundation and the addition of the Turtle Protection Act in 1994 to the Wild Animals and Birds Protection Act (1961) Aldabra’s turtle population has slowly recovered.

“This has been an incredible conservation success and demonstrates the importance of protection for these ocean wanderers.”

The Chief Executive of SIF, Dr Frauke Fleischer-Dogley confirmed to SNA that Aldabra is the only site in Seychelles which has been accepted into the network at this point in time.

The SIF CEO is of the view that if other sites in Seychelles meet the evaluation criteria they should also be proposed to the secretariat of the IOSEA Memorandum of Understanding.

This is the fourth international ecological recognition for the Aldabra atoll.