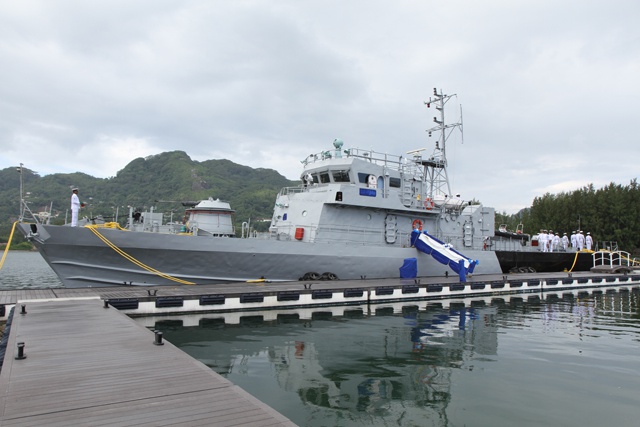 PS Constant docked at the Seychelles Coast Guard base before the handing over this morning. (Mervyn Marie, Seychelles News Agency)

The 46 metre long and 7.5 metre wide vessel is the second fast attack ship given to the Indian Ocean island nation by India after ‘PS Topaz’ in 2005.

The handing over ceremony was held this morning at the Seychelles Coast Guard base at Ile du Port-overlooking port Victoria where the Seychelles President James Michel who is also the commander-in-chief of the archipelago's Defence Forces unveiled the plaque revealing the name of the new vessel.

Formerly the ‘INS Tarasa’, the latest addition to the Coast Guard fleet has been named ‘PS Constant’ after one of Seychelles' main fishing banks in the southern part of the Seychelles archipelago, near Coetivy island.

A milestone in Seychelles-India relations

In an interview with the local press, Michel described the donation of another patrol boat by India to Seychelles as another milestone in the relations between the countries which he says will allow the island nation to build its capacity to defend its sovereignty, economic zones and resources while also play a greater part in sustaining peace and security in the Indian Ocean.

The Chief of Naval Staff of the Indian Navy Admiral Robin K.Dhowan who has travelled expressly to Seychelles for the handing over of the new patrol vessel said that Seychelles and India share vast maritime interests while they also have common security concerns.

“The seas around us are gaining newfound importance as each day goes by because of their linkages with the blue economy. And there is no doubt that the current century is the century of the seas. The Indian Ocean which has emerged as the world’s centre of gravity in the maritime domain washed the shores of both our countries and makes us maritime neighbours, linked with the same ties currents and winds that connect us. The people of the two countries have stretched their hands over the Equator to build bridges of friendship. With the handing over of INS Tarasa today, these bridges of friendship will be strengthened further and will pave the way for opening up of further avenues of cooperation between the Indian Navy and the Seychelles People’s Defence Forces” he said.

Dhowan added that India feels it has a duty to help sister countries secure the seas that surround them thus the reason why the past years has seen the gifting by India of a first patrol vessel ‘PS Topaz’  handed over in 2005, which is the Seychelles Coast Guard's flagship.

Topaz was actively involved in anti-piracy operations, notably between 2008 and 2012, when the western Indian Ocean was infested by the new scourge.

The Commanding Officer of the Seychelles Coast Guard, Lieutenant Colonel Simon Dine noted at the handing over ceremony that despite a marked drop in piracy, there are still “other illegal activities, including unlicensed fishing still going on in Seychelles' EEZ and that the acquisition of the new patrol boat was timely.”

Youngest Seychellois Commanding Officer at the helm of Constant

PS Constant which has a displacement of 319 tonnes and can travel at a maximum speed of 28 knots with a cruising speed of 18 knots, shall have four officers and a crew of 20.

“I feel good, I feel proud and I see progress for me and for the force as well for Seychelles Coast Guards. I see us moving forward compared to when I joined in 2005,” Ernesta told SNA.

Ernesta and his crew who sailed on the patrol vessel while it was being towed from India to Seychelles said they have had three sorties two weeks before which was an opportunity to do some training and familiarize themselves with the equipment onboard the ship.

“…..it its fast and has good manoeuvrability, it feels good to work on it. It’s a good opportunity for young people since now we have more vacant posts, we have a new ship and we need crew members…”

Ernesta has studied in a number of countries from India itself, the UK, USA, Tanzania and most recently he spent 2 years in Germany undertaking an International general and admiral staff course.

PS Constant is the second maritime patrol vessel to be gifted to Seychelles this year. In April China donated a purpose built vessel ‘Etoile’ to the Indian Ocean island nation.

Apart from Etoile and Constant there are four other patrol vessels in the Seychelles Coast Guard's fleet; Topaz, Andromache (built in Italy in 1982 and funded by the Seychelles government) and La Flèche and Le Vigilant (both gifted by the UAE in 2011).

Three frontline warships from the Indian Navy's prestigious western fleet, have coincided their three-day stopover in Port Victoria with the handing over ceremony of Seychelles' newest coastguard vessel.

‘INS Mumbai’ one of the Indian Navy's biggest destroyers, one modern Stealth Frigate ‘INS Talwar’ and a tanker with over 6000 tons displacement ‘INS Deepak’ arrived in Port Victoria from Kenya yesterday.

The Indian ships will be open to the public from 9am to 1pm local time tomorrow while the Indian Navy officers are expected to give a one and a half hour musical performance at the National Cultural Centre in Victoria also tomorrow.

The Indian Navy’s Chief of Naval Staff Admiral Robin K. Dhowan who has timed his visit to Seychelles with the arrival of the three Indian warships to Port Victoria and the handing over of PS Constant to the archipelago’s Coast Guard also met with the Seychelles President James Michel at State House today.

“The most important aim of my visit is to renew the strong bilateral relationship and this strong bond of friendship which exists between the Indian Navy and the Seychelles Peoples Defence Forces,” said Dhowan after the meeting.

According to a statement issued by State House this afternoon Michel and Dhowan shared their views about Indian Ocean affairs, the vision of the Blue Economy concept and maritime security.