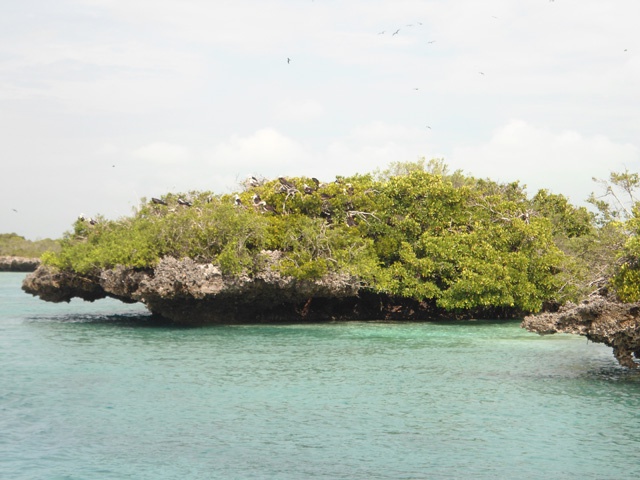 The 'Aldabra House' will be a visitor centre located on the Seychelles main island of Mahe dedicated to the remote Aldabra coral atoll.(Rassin Vannier, Seychelles News Agency)

(Seychelles News Agency) - British architectural firm Marks Barfield has been announced the winner of an international competition to design a visitor centre in the Seychelles dedicated to the Aldabra coral atoll in its outer ring of islands.

Marks Barfield are more well-known for the mark they have left on the London skyline with their design of the London Eye, a 135-metre high giant ferris wheel that is a lot like Marmite – Londoners either love it or they hate it. And regardless of their feelings for or against it, the structure has come to represent a part of British identity just as much as the sticky black condiment.

Hopefully, ‘Aldabra House’ – the proposed remote access visitor centre to be based on the main inhabited island of Mahé – will be less divisive.

Marks Barfield encountered some stiff competition from five other firms, including UK-based Wilkinson Eyre and WWT Consulting – a subsidiary business of the Wildfowl & Wetlands Trust – as well as the New York-based Danny Forster Design Studio and Dirk Hebel from Zurich University in Switzerland.

The remote Indian Ocean island atoll of Aldabra, the second largest in the world, is further away from the main inhabited ‘inner islands’ of the Seychelles archipelago than it is to the coast of Africa and the neighbouring islands of Madagascar and the Comoros.

Aldabra is also a protected nature reserve and was declared a UNESCO World Heritage Site in 1982. Home to a population of endemic giant Aldabra tortoises that is far greater than the 90,000-strong human population of the Seychelles, the ponderous creatures freely roam throughout the hot, arid and desolate landscape, often huddling under sparse trees to escape the baking rays of the sun.

But these gentle creatures were not always so numerous – intensive exploitation of Aldabra giant tortoises for their meat and shells by colonial seafarers meant that by the year 1900, the tortoises were almost extinct, and struggled to recover even after their exploitation on the atoll was officially banned in 1891.

Its need for protection and lack of accessibility means no tourism revenues – visits to the island by people other than researchers and staff members are strictly controlled by the Seychelles Islands Foundation (SIF), a public trust that manages the reserve from their headquarters on Mahé.

The raised coral atoll is comprised mainly of the larger islands of Ile Picard (West Island), Polymnie, Malabar Island (Middle Island) and Grand Terre (South Island) all surrounding the shallow lagoon teeming with black-tipped sharks, sea turtles and manta rays in the centre of the atoll.

Sights and sounds of Aldabra on Mahé

SIF now hopes that the Mahé-based Aldabra House, set to be situated at Roche Caiman, just outside the capital city of Victoria, will provide locals and tourists alike with the Aldabra experience by coming as close as possible to the fauna and flora of Aldabra without actually being there.

According to a press statement released by the organisation, the main aim of the centre, which will be built to the “highest international standards in sustainable architecture”, will be to increase public access to Aldabra by bringing a little piece of Aldabra to Mahé.

The foundation hopes to raise a constant stream of revenue from the visitor centre to fund its projects on the atoll, which for years has been subsidised in part by the revenue from SIF’s other UNESCO World Heritage Site of the Vallee de Mai on Praslin, home to the world’s only indigenous coco-de-mer palm forest.

The Chief Executive Officer of SIF, Frauke Fleischer-Dogley, told SNA that Aldabra House was meant to become a tourist destination of its own and a fee for visitors would need to be implemented to maintain this experience at the level of international standards, although it remains unclear if there would be a lower or waived fee structure for residents of the Seychelles.

“The details of the pricing are not concluded yet, however until this day SIF has always encouraged visitation of the UNESCO World heritage sites by residents and not charged entrance or impact fees,” said Dr Fleischer-Dogley.

The CEO did not comment on the total project cost; however she did tell SNA that the funding for the building would come from a diverse range of sources, including grants, loans, in-kind contributions and from the SIF’s own coffers.

With the planning phase of the project expected to begin soon, the SIF chairman, Ambassador Maurice Loustau-Lalanne, stated that the SIF team was looking forward to partnering with Marks Barfield on the Aldabra House project.

“With a company of such a high caliber, the design for Aldabra House is destined to be a design unlike any other, befitting a project of this scale and World Heritage Site of such importance,” he said.