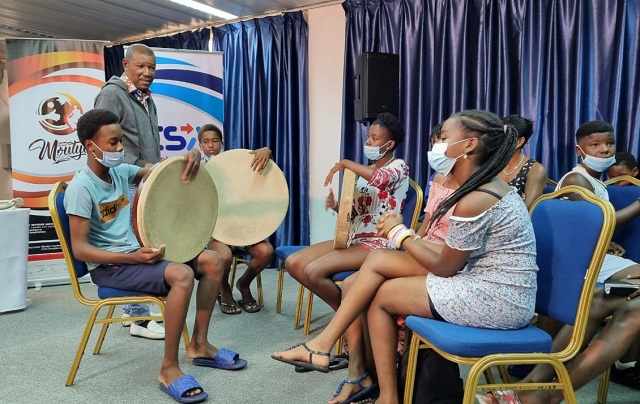 (Seychelles News Agency) - With the aim of promoting one of Seychelles' traditional dances amongst secondary school children, the Creative Seychelles Agency (CSA) on Monday started a two-day workshop teaching the students how to play the Moutya drum.

On December 15, 2021, the Moutya dance was added to UNESCO's list of intangible heritage, becoming the first cultural tradition of the island nation to receive such recognition. Since then, greater efforts are being made to preserve this part of Seychelles' heritage.

During the training exercise facilitated by the Honorary Cultural Ambassador, Patrick Victor - a renowned singer and composer - the students learned about the origin of the Moutya and how it arrived in Seychelles. They also learned the different roles of the drums and how to play the three sizes of the instrument used, as well as what the drums are made of and how to heat the drum before playing.

The Moutya dance was introduced to Seychelles, an archipelago in the western Indian Ocean, by enslaved Africans who were brought there by French settlers. It was originally performed around a bonfire, deep in the forest in the dead of night. The dance was an expression of resistance, allowing enslaved people to share their suffering and sing about the difficulties they faced, far from their masters' ears.

The cultural officer at the Seychelles Institute of Culture, Heritage and the Arts, Alain Jules, told the press on Monday that there is still much work to be done for the youth, especially secondary school students.

He explained that the first workshop brings together a small number of students from the Anse Boileau, Plaisance and Perseverance secondary schools. These students were first, second and third place winners of a Moutya dance school competition held earlier this year.

"This is the continuation, and we are getting the students to learn the ins and outs of a Moutya drum. Later during the year, we will teach them how to compose original Moutya lyrics, inspired by events taking place today around them. The importance is to know the structure of a Moutya song, how to hold a drum, the role of each drum and how to dance Moutya in the authentic way," said Jules.

One of the participants, Andrea Matombe of Anse Boileau school said that this is the first time she has played the Moutya drum. She explained that her interest in Moutya was sparked by some of her family members who have always been involved in promoting the tradition and culture of Seychelles.

"It is difficult to start playing the Moutya drum but I know I will get used to it. It is important to know our tradition and as the youth we will be able to develop it further. I, however, prefer to dance," said Matombe.

The workshop is part of a week-long series of activities of the first 'Lafet Moutya Sesel' [Seychelles Moutya Celebration] aimed at promoting the dance and giving it its rightful place in the Seychellois culture and bringing more awareness to its importance and value.

This six-day event will take place between Monday, August 29, and Saturday, September 3. The activities will also mark the fourth anniversary of the repeal of Regulation 115 of 1935 Drums Regulation which banned the beating of drums in Victoria and other locations on Mahé, Praslin and La Digue after 9 pm.